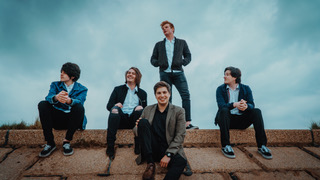 Haytor are a young energetic indie-pop band based in Devon, with eccentric and lively performances, and charismatic pop hooks. Since forming in 2016 the band have gigged consistently across the South West, playing with acts such as Deep Blue Something (Breakfast at Tiffany’s) and Outlya, and gaining airplay across the country from local stations such as BBC Introducing Devon to interviews with stations in Surrey including Ridge Radio.
“Eclectic pop rock – complete with angelic piano licks, crisp guitar tone, solid thumping bass and wide open drums to give it that driving sound Haytor has so elegantly mastered. Once you add Austin’s dynamically diverse vocals the whole band ties together creating one big sound lifting the spirits of every tired soul in the room.” – On The House Music
“Haytor are one of the most exciting bands to come out of South-West England for a while. They’re hard to define, but that’s precisely why we like them so much…” – One On One
About the song:
This song is the story of someone who’s down on their luck, and struggling through but constantly trying to battle with their own thoughts and frame of mind. The song is very high energy and I really wanted to contrast the liveliness of the track with some quite dark introspective lyrics.
BAND MEMBERS:
Austin Robison – Lead Vocals & Piano
Jonny Lewis – Guitar & BVs
Cal Verney – Drums
Ryan Hawkins – Guitar
Cameron Robison – Bass & BVs
SOCIAL LINKS TO HAYTOR
Facebook: https://www.facebook.com/haytorband/
Twitter: https://twitter.com/haytorband
Instagram: https://www.instagram.com/haytorband/
Website: http://www.haytorband.com
Youtube: https://www.youtube.com/channel/UCb4fagPMVmmM0KVuIANYEkw?view_as=subscriber
SoundCloud: https://soundcloud.com/user-425983353
Spotify: https://open.spotify.com/artist/3egLcCVG5sS2KQuBMC056b
Apple Music: https://itunes.apple.com/gb/artist/haytor/1114519357
Teach The World About Indie Music and Share