The Man Behind The Mic from The Premium Blend Radio Show 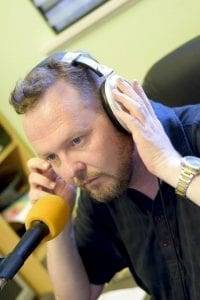 Stuart Clack-Lewis may be known to many as ‘The Premium Blend Radio Show’. This is the man behind the mic who brings you great music from around the globe every week on 95.9 Halisham FM.

The Premium Blend Radio Show is not your average radio show; more like your high energy music blast which lasts for two hours and features live musicians & bands in the studio.

It’s obvious that Stuart Clack-Lewis has a great love for indie music and emerging artists as he packs in live artists and interviews from his local area in East Sussex (UK), Guest DJ’s with their own 20 minutes of various pumping mixes as well as independent music from around the world.

We had to find out more about the man behind the mic, Stuart Clack-Lewis.

MT/Tracey: Hi Stuart, I guess my first question would have to be…How long has ‘The Premium Blend Radio Show’ been running?

Stuart: Hi Tracey, the show in its current format has been running for about two and a half years now but I started the show as a 90’s show at Radio DGH.  When I moved to Hailsham FM, I wanted to refresh the show and create something special.  I always wanted to head down the unsigned and emerging artist route and took the opportunity to do so. In answer to your question, the Premium Blend brand has been running for over 5 years now.

MT: How did you think up the programming of the show to include live acts and special guests DJ’s etc.

Stuart: I always had it in my mind to take it down this route and initially just wanted to play emerging artist tracks. I used to play a 12” track on the 90’s show but wanted to expand this to a full mix.  The idea to bring live acts onto the show came as an epiphany at a friends house when I was having Sunday dinner and someone mentioned that you don’t hear much live music on the radio (well not as much as you used to hear), so at that point I decided that if I played unsigned tracks, DJ Mix and a live act, that would make a great radio show!!

MT: Where is ‘The Premium Radio Show’ Studio? i.e. your house, office…?

Stuart:  The studio is based in Hailsham, East Sussex, about 30 miles away from Brighton.  Its a lovely, self contained studio, all soundproofed, thank goodness with some of the bands I have in!!

MT: Have you been in Radio prior to ‘The Premium Radio Show’? 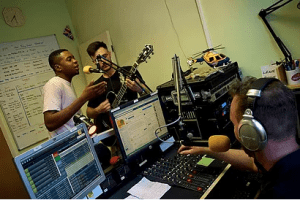 Stuart: No, I always wanted to get into radio but never got the opportunity until about 5 years ago.  I did look to get into it about ten years ago but life got in the way.  I wish I had got into radio when I was much younger (early 20’s) but personally I probably wasn’t ready then.

Stuart: Personally, I love it all! I do struggle with death metal but generally, I’ve loved music since I was a small boy and that will never change.

MT: Is there anyone else who helps you in running the show?

Stuart: My girlfriend Pebbles helps me with parts of the show, such as the graphics and helps with my show notes.  She has also branched out to start doing reviews for artists we have on, gigs we’ve been to and tracks/EP’s we get sent.  Check her out at Pebbles Reviews on Facebook.

MT: It’s a big world out there; How do you choose and find your tracks and artists?

Stuart: The show runs on submissions along with bands I meet at gigs and festivals.  My biggest resource is from Twitter (@PremiumBlendRad) as I do the Music Hour UK and Unsigned Hours to open the show for submissions.  I also put a shout out through the show each week to submit tracks.  Then its a case of having to listen to them all to pick the ones for the show.  The most I got in one week was just over 350 tracks.

MT: What was it that fancied your interest for you to get into radio?

Stuart: I can’t sing nor can I play any instruments and I’ve certainly tried.  I can talk and push buttons so the only route that presented itself was radio.

MT: Do you fund the show yourself?

Stuart: Yes I do.  The set up and running of the website, all my merch and anything else to do with the show is paid for by myself.

MT: Do you have any annoying narks that perhaps you wish you could change in regards to people listening, responding or how artists could make your job a bit easier?

Stuart: Not really any narks.  I’m just really happy for people to tune in.  If they ever wanted to share my posts or even just leave a comment, that would make my day.

MT: What does a normal week entail for Stuart Clack-Lewis? 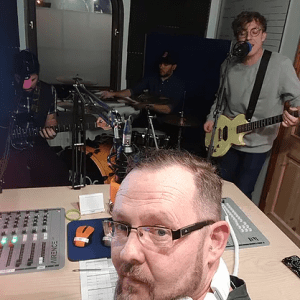 Stuart: Music, Music, Music! If I’m not listening to music, I’m getting tracks ready to listen to or I’m off to a gig. It’s not a bad life!!

MT: The internet is a very big world in which takes a great deal of jumping up and down to get people to notice you and listen. How do you promote your show and get people to listen in?

Stuart: I like to think that I’m pretty good with social media and post my show everywhere, as you might have seen my post pop up on your pages from time to time. I also go to music networking nights, which has always been very beneficial, especially Riff Taff Music Networking.  Sometime you just have to be a little bit cheeky too, as I will text into other radio shows and get a little shout out. The last one was on the BBC Introducing South.

MT: How prepared do you have to be to produce a live radio show?

Stuart: On average, I spend about 25 – 30 hours a week getting a two hour show ready.  You have to be prepared otherwise the show will sound terrible and I won’t do the music any justice.  I like to have everything perfect before the show starts.

MT: Do you happen to have a dog in the studio, because we like dogs? (weird question I know)

Stuart: No pets allowed in the studio but I like the idea.

MT: If there was absolutely anything at all you could change regarding the indie music scene and the music business, what would you do?

Stuart: Give grassroots venues more money to stay open and inject even more money to open new venues.  The grassroots scene is struggling in the UK and venues are closing all across the country right now, including one of my favourite places in Brighton, with the immanent closure of Sticky Mikes Frog Bar, a fantastic live venue for bands starting out on the scene along with more established bands from around the country performing there.  Apart from that, maybe bigger, more commercial stations giving airplay time to smaller bands.

MT: Are there any change of plans or ideas for 2019 with ‘The Premium Radio Blend Show’?

Stuart: Yes there is!  2019 is when I will look to make the show bigger and better.  I’ll be running the stage at The Magnificent Motors weekend for one of the days on the May Day Weekend down on Western Lawns in Eastbourne.  I have a host of great local bands already booked for this and have a few more to tie up.  I will also be running the ‘unplugged’ stage at the Off The Record all dayer festival in November next year. It will be the third year that this festival will be running and feel honoured to be part of it.  Applications open in March for this.

MT: Is there anything you would like to let us know about; or your listeners?

Stuart: Just a massive thank you to all the bands, musicians, DJ’s and especially the listeners for tuning into my radio show.  I feel incredibly humble for all the support I’ve received with the show and if it wasn’t for these talented people sending their tracks, mixes or performing their wonderful live music, there wouldn’t be a Premium Blend Radio Show. Thank you all.