Shakira Lea Fauser, 19, of Whyalla released her Debut Single “I MISS YOU” to the world on Sunday 24th February  thanks to the Whyalla Recording Scholarship. 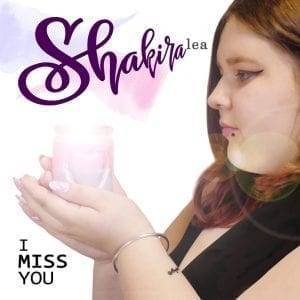 A “who’s-who” of musicians feature on the song including Grammy Award Winner Andrew Synowiec, Jim Riley from platinum-selling group Rascal Flatts and mastering in New York by Randy Merrill, who has been recently acclaimed for the “A Star Is Born” Soundtrack.

“I Miss You” is dedicated to anyone who’s experienced loss and found a way to heal.

This power ballad showcases her emotive vocals and sincere message.

Shakira Lea was announced as one of the WRS winners in September last year, entitling her to a year of free management from Stormfront Productions and a professional recording studio package worth $10,000.

Danielle had a chat with Shakira and this is what she had to say.

Danielle: Tell us about your creative journey. How long have you known that you wanted to be a professional singer?

Shakira: I’ve been interested in singing and music my whole life. I’ve been writing songs since I was 6 and since then I’ve always been interested in recording a song – but there was never really a song I wrote that I fell in love with as much as “I Miss You”. I worked so hard on perfecting the lyrics and writing the music because it was important to me – and I did feel as if it could be a song I could use to push me in the direction of becoming a professional singer.

Danielle: Your latest single is “I Miss You”. Can you explain the meaning and significance of the song? How does “I Miss You” fit into your brand or current creative direction?

Shakira: This song was written after several people in my life had experienced child loss. One of my closest friends went through it and to work through it she’d listen to the same few songs on repeat and I wanted to be able to help, and express the emotions I saw in them through a song. I did dedicate my song to my Aunty and her daughter who was sadly a victim of child loss.

This song fits into my creative direction as I love to write songs about life experiences. When I was younger I wrote songs about bullying and as I grew up it evolved more into wider personal experiences and experiences of those around me. I feel that’s when my songs are at their best.

Danielle: Congratulations! How does it feel to know that “I Miss You” climbed to NUMBER 18 on the iTunes Australia Country Chart.  How has that impacted your music career?

Shakira: It was such an amazing and surreal feeling. When my managers were talking about the release we agreed we would be thrilled if a fully Independent Single like mine could break into the top 200 – so to get to #18 in Australia was just so exciting.

It had a great impact with my music reaching a lot more people than I could ever imagine – and the pure excitement and joy that came along with that was amazing.

Danielle: You were honoured with the winning of the Whyalla Recording Scholarship. How has that changed your music career?

Shakira: It has given my music career an amazing boost that I don’t think I could have achieved without the Scholarship. It gave me the opportunity to work in a recording studio, learn the whole recording process – and experience a whole new side to this industry that I love so much.

I learned about the processes of mastering, artwork and marketing which is all so fascinating – most people never see that work and don’t think about because it is all behind the scenes.

Danielle: Do you have a favourite quote or message you’d like to leave with your fans and if so, what would that quote be?

Shakira: There are two quotes that I have always kept in mind.

The other is “Good music doesn’t have an expiration date”. This quote is important to me as I’ve had a few people judge some of my music tastes. I really do enjoy older music that’s more from my grandparents generation than mine – but if it’s a good song that you relate to and feel something from, then others opinion won’t matter.

Danielle: At 19, how do you manage to balance life with your music career?

Shakira: It can be hard at times to juggle everything from work, my music and also be social but I find that it’s easiest when I focus on what’s going on in the moment instead of overwhelming myself by trying to figure out everything I’ve got going on that day.

Danielle: Besides music, what other passion do you have that you would like your fans to know about?

Shakira: My other passions aside from music are my pets and making candles. Both really relax me and in times of stress calm me down!

Danielle: What has been your favourite performance and why?

Shakira: My favourite performance would be one of my performances at the world famous Tunarama Festival in Port Lincoln because my great grandad came to see me. He meant the absolute world to me so seeing him there supporting me meant everything.

Danielle: Do you have any upcoming performances that you would like your fans to know about?

Shakira: Two of my upcoming performances this month are the official “Launch Party” for my Single – and I’ll be performing the National Anthem at my hometown’s Anzac Eve Vigil – Anzac Day is Australia’s most sacred moment to remember all who’ve given their lives in war for our Country.

Danielle: Is there anything else you would like to tell your fans?

Shakira: I would love to say a massive thank you to my family and fans for all the support I’ve received since releasing my Single, and also for all the help provided by Alison Hams and Mark Tempany. It’s been an amazing journey so far and I can’t wait to see where else it takes me.

LISTEN TO “I MISS YOU” on Spotify here:

I MISS YOU – SHAKIRA