Layne Elizabeth Set To Release A New Single Every Month

Layne Elizabeth may be in her teen years, but her drive, experience, personality and talent are grabbing the attention of the media and industry already!  All you have to do is listen to her music once to know, Layne Elizabeth can impact everyone with her talent and vocals. Teen Talks was happy to connect with Layne Elizabeth while she shared some of her already amazing stories with us for “Music Talks”!

Music comes so naturally for you that you’ve been told you have a perfect pitch. When did you realize your musical gift and that you wanted to be a singer / songwriter? You also play multiple instruments. Can you list the instruments you play and when you first started playing each one?

My parents got me a piano for Christmas when I was six, and I would hear songs and be able to play them on the piano, so my parents decided to put me in lessons that year. Since then, I’ve learned how to play guitar, ukulele, and bass also. I got my Martin guitar a few Christmases ago and learned to play on that, and that’s when I really started getting serious about songwriting. With ukulele and bass, I’ve been able to just pick them up and play whatever I want from using the other instrument knowledge I already have.

How many songs have you written? Do you collaborate with anyone when writing your music? When you’re writing, is there a particular message you’re hoping your fans will take away from your music? 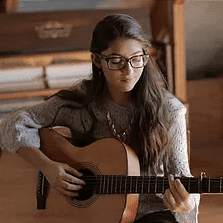 I’ve been writing since I was 13 and have written probably around 70 or more songs since I started. I write almost all of my songs on my own at the moment, but I would really like to collaborate with other artists in the future. When I write, I want my songs to represent the feelings of people who hear them and not just my own.

You also played in a band. Do you have a name for the band? Can you tell your fans how you and your band members met? How has playing in a band influenced your songs and live performances?

The place where I used to take music lessons offered a garage band program that I joined. Eventually, a few other musicians from the program and I ended up leaving and making our own independent band called The Backup Plan. Playing with the band helped me build up the confidence to sing in front of people on my own because I was able to feel more comfortable with the band playing behind me. I stopped playing in the band a little over a year ago to focus more on my solo career.

I did a college house show with a friend of mine, Jake Scott, this past summer. It was one of my favourite performances because I got to explain the stories behind a lot of my original music, and the audience was the most attentive one I’ve ever played for, so I was able to share a little more about my songs.

While you were on the west coast, you walked into a particular guitar shop and started to play. The reaction of the owner and customers only confirmed that you belong in the music industry. Can you tell your fans the story of where you were, the reaction of everyone in the store as you were playing and singing, and what you were thinking at that very moment?

I was visiting some family in California, and they wanted to take me to a place called Norman’s Rare Guitars because they thought I would like it. I was noodling on a few of the guitars, and I wanted to make an Instagram video of me playing something, so I had my mom record a little video of me playing and singing. The owner of the store, Norm, heard and asked if he could make a video of me singing for their YouTube channel. He interviewed me a little bit at the beginning of the video, and I was really shy in the video because I had never been interviewed before. When I saw the video online for the first time ever, I thought it was so cool because it had almost 10,000 views on it in the first week, which was a lot of people hearing my music!

You once described yourself as reserved or shy. So many artists and fans can relate to having a certain level of anxiety before going on stage or before a big event in their life. How did you overcome your stage fright? What advice would you give others who feel that same kind of angst before they go on stage or participate in an important event?

Playing in a band for a long time really helped me with my confidence, but I still was terrified of singing without the band behind me. In the spring of my freshman year, some of my fellow band members and I got asked if we each wanted to do a solo act at a big showcase performance with a bunch of other local artists. For some reason, I said yes, and I pretty much overcame my stage fright instantly with that performance. It’s a very very hard thing to do, but I would encourage artists who are struggling with similar things to push themselves out of their comfort zone and maybe start with a small group of friends to sing for first. If you just do it and don’t overthink the uncomfortableness of it, you’ll be happy you did it and feel accomplished afterwards.

Where can fans find your music and performance information? Do you have any new songs coming out? Is there anything else you would like fans to know?

People can check out my website for more information:

Also, I post about my life, my upcoming shows and new music on my social media:

I have lots of new music coming out this year! In January, I released the first single, Empty, of a 12 song album that I recorded over the summer. I’ll be releasing a new single from that album each month in 2019 and then re-releasing it as an entire album at the end of the year. Keep an eye out for the next single, The Ride, which will be out February 22. It’s about my life as a musician and how the journey can be just as enjoyable as the destination.