Julia Jade is a young singer/songwriter with a bright future! She graduated the Berklee College of Music at the age of 19 in May of 2019, and her unique songs are bound to get stuck in your head! Here’s a little more about the talented musician!

MADDIE/MT: How did you first get into music and/or decide you wanted to pursue it?

JULIA: My parents are both musicians and started me on piano lessons when I was 3.5 years old so it wasn’t super surprising. When I was around 6, I told my sister that we should both go to our rooms and not come out until we both had written a song, so I think it was always a little bit inside of me. I grew up doing children’s theatre and found a passion for acting for a while, and ended up attending the LA County High School for the Arts, where I switched from theatre to music during my freshman year. At that time, I applied to the Berklee College of Music on a whim and it was the first school I was accepted to. That’s when I really started thinking, hmm.. maybe I could really do this.

MT: What instruments do you play and/or which would you like to learn most?

JULIA: I play and write on piano and ukulele. However, I studied music education in college and because of that dabbled in many instruments, learning the basics just enough to teach them—so I can noodle around on some unexpected instruments. However, I’ve always wanted to play cello, but when I was in elementary school my parents thought it was too big for me to carry around, so I settled on flute. But the dream is still alive and well and maybe one day I could pick it up !

MT: You have a brand new release called “Speed Dating”, what can you tell us about the inspiration behind this song?

JULIA:The song was honestly inspired by my partner and how right before we got together  I had given up on the prospect of dating for a while because I was about to graduate college early. I thought it would be fun to paint the concept of an apathetic speed dating attendee who spots that special someone in the room and gets swept of their feet. When I produced it, I decided I wanted it to sound like what the inside of my head sounds like when my partner is around. When submitting it to blogs, a few of them said it was a little bit bright sounding for their taste, and I liked that feedback because that means it’s an authentic depiction of how I feel when I’m with her.

MT: What is your favourite lyric from the song and why?

JULIA:This is a toughy because I have a few I enjoy, but I think my favorite would have to be: “she speaks in works of art.” I think sometimes I overthink when I write my music, wondering if a lyric is clever enough or will resonate with my audience, but this one felt so simple because it was so true & authentic to the person I was writing about. 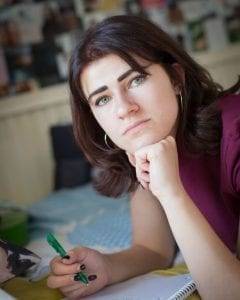 MT: Who are your major influences? Musically and also who you look up to as performers in general?

JULIA: I think those are one in the same for me. I absolutely worship David Bowie and think he’s probably the reason I’m such an outer space case. I’ve always loved how he has painted mystery as such an exciting thing. I also grew up listening to a lot of Elton John and Billy Joel and feel that they have absolutely influenced my theatrical and eccentric use of the piano. In terms of my contemporary influences, I am heavily influenced by Tegan and Sara, Regina Spektor, Kate Nash, and Dodie—and I pepper in some old Taylor Swift to stay true to my roots.

MT: If you could write a song with one of these people, who would you choose, and what do you think you’d write about?

JULIA: I’d die to write with Dodie and think we could write a killer song about bi/pan erasure because we both think representation is important.

MT: What has been your favourite venue that you’ve played at and/or what is your dream venue?

JULIA: It’s hard to pick a favorite so I’ll pick the place I played my first ever gig. It’s called Genghis Cohen and it’s a combination chinese food and music venue and it was the first time I had performed a set of originals, and at the end of the night they handed me a stack of cash and I couldn’t believe someone would pay me to have so much fun ! They have a really nice set up and it’s always a really nice place to be. In terms of my dream venue, I’ve always dreamed of playing at the Greek Theatre in Los Angeles. It’s an outdoor venue that’s a really nice size and I’ve seen some of my favorite artists play there. Whenever I’m there, I always catch myself daydreaming about what I would say if I got to be on that stage, how I would want to tell the people in the nosebleed section that I see them and I’m really glad they came, and other things like that.

MT: Is there a song that you wish you wrote because you feel so connected to it?

JULIA: The Shell by Lucy Dacus. That song is a work of art and is a beautiful representation of meeting people where they’re at.

MT: What are you currently working on? What can fans look forward to in the next few months?

JULIA: I’m recording two new singles, and one of them is a Christmas song! So everyone can expect to be hearing from me around the holidays, and otherwise I’m working on a few more self-produced projects as well. I’m excited to be gigging a bit in Nashville and will be in a couple of other cities as well including Los Angeles and Chicago for a little bit.

MT: If you could give one piece on advice to your younger self, what would you say?

JULIA:Nothing is as scary as you’re making it out to be and everything is going to be okay.

MT: And just off the topic of music, if you were able to go tomorrow, what place would you travel to?

MT: Where can we find out more about you? Links/social media’s etc!

JULIA: Find me on instagram at: julia_jaded. That’s where I’m the most active. Otherwise, I have a Facebook page under Julia Jade, a website at the URL juliajade.net, and an inactive twitter with over 100 incoherent tweets about The Beatles.

LINKS TO JULIA BELOW 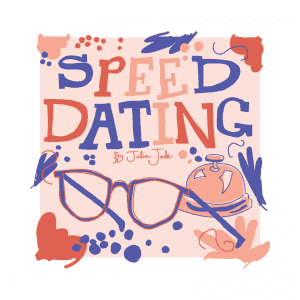