15 year old JAYLEE DANIELS from the South Australian Outback has released her Debut Original Single to the world, thanks to sponsorship from STORMFRONT PRODUCTIONS and the Whyalla Recording Scholarship. 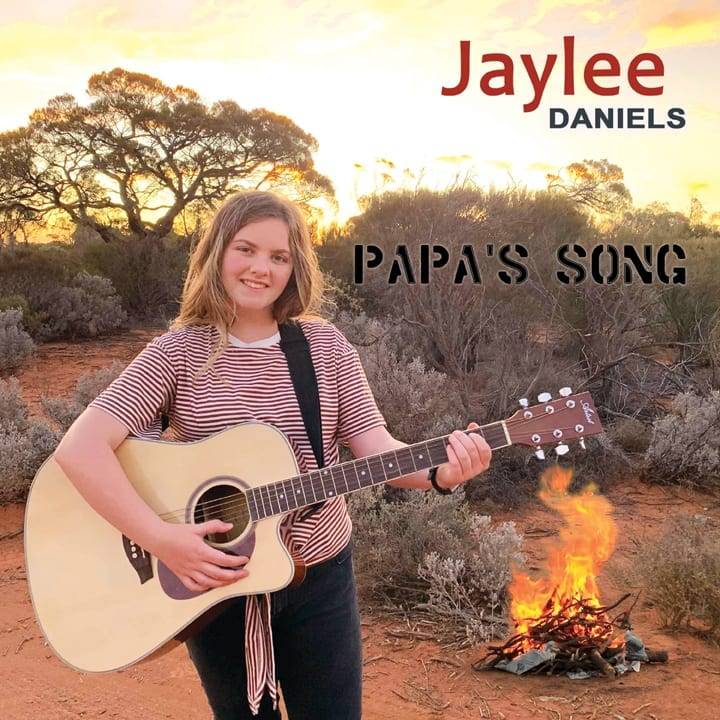 In an amazing achievement for South Australian music, Jaylee’s “Papa’s Song” has reached NUMBER 7 on the iTunes Australian Country Music Chart and is receiving radio airplay across the country.

“Papa’s Song” is a tribute to Jaylee’s beloved late grandfather as she follows his footsteps with a passion for country music. This bluegrass song will have everyone singing around the campfire as soon as they hear it.

Danielle Haskell caught up with Jaylee and asked a few questions.

Danielle: Tell us about your creative journey. Your latest single is “Papa’s Song”. Can you explain the meaning and significance of the song?

Jaylee: I was lucky enough to be born into a family that loves music, from my Papa to my older sister who also sang and performed. I started lessons at a young age and have worked hard to be the best I can be at something I love. I enjoy the challenges of singing, and playing guitar, performing and songwriting.

I wrote “Papa’s Song” as a tribute to my late Papa and all the memories he created with our family. He taught us to love music and he was a big Country Music fan himself. He loved to listen to us sing and he really enjoyed following the other country musicians in my hometown of Whyalla.

Danielle: Tell us about how “Papa’s Song” fits into your brand or current creative direction?

Jaylee: Until I won the chance to record my Debut Single I didn’t really think I had a brand, although Country Music has been a big part of my family’s music influence. I like listening to a variety of music, but it wasn’t until I started writing my own music that the Country style came out in my writing. I have always enjoyed putting words to paper, and seeing my songs come to life. My songs tend to be life-related and very family-focused, which is how “Papa’s Song” was born.

Danielle: HUGE Congratulations! How does it feel to know that Papa’s Song, on its first day, climbed to NUMBER 7 on the iTunes Australia Country Chart where you are one of only two South Australian artist among a predominant Major American field (The other SA Artist was fellow WRS Winner Shakira Lea at NUMBER 18!)? How has that impacted your music career?

Jaylee: Number seven, WOW! I never thought that Papa’s Song would be in the top 100, let alone Number Seven. “Papa’s Song” is so special to me and I’m so proud that others loved it too. To see my Debut Single in the charts has shown me anything is possible and it’s been an awesome start to my music career as it’s given me an amazing platform to begin my journey on. It is something that I know Papa would have been super proud of too.

Danielle: Your Single was part of your prize in winning the Whyalla Recording Scholarship. How has that changed your music career?

Jaylee: Being awarded a Whyalla Recording Scholarship prize has allowed me to not only record and release my Debut Single, but it’s shown me how songs are recorded and produced, and given me a big insight into the music industry. To me the WRS is so much more than just winning a prize, it’s the guidance and mentoring that I have received from Alison and Mark at Stormfront Productions that has allowed me to achieve my dreams of becoming a recording artist. This Scholarship is huge to young musicians like myself, giving us this amazing platform to start off our own music carers with our Original music.

Danielle: Do you have a favourite quote or message you like to leave with your fans and if so, what would that quote be?

Jaylee: “Dreams don’t work unless you do, aim for the moon and if you miss you may hit a star “

Having one of my own songs come to life and be presented to the world is definitely hitting my star. I never imagined it would become my reality.

In 2016 I was honoured to finish in the top 5 of the WRS and thoroughly enjoyed the experience – so I decided to enter again in 2018 with “Papas Song”. Winning my prize shows me dreams really do come true so dream big and never give up!

Danielle: How do you manage to balance life with your music career?

Jaylee: Being only 15 and still studying in High School, life at the moment is a juggle as my schooling is still my main priority. But the WRS team provide great guidance and encouragement with my music and with massive support from my parents, I still get to do the things I love with my creative arts of Music and Dance.

Jaylee: My favourite performances so far would be Whyalla’s LIONS “Carols In The Park” in front of 5500 people. I’ve volunteered as a member of the “Carols Community Choir” for many years and feel privileged to be able to perform at this charity event which has been a huge success for so many years. I enjoy singing and performing at all my events but do love singing at charity events within our community, such as “McHappy Day” and “Jamm for Genes”.