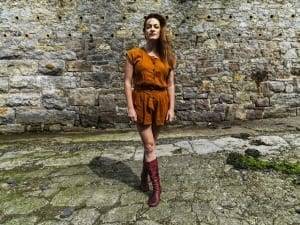 ‘Into the Woods’  is the follow-up to SERA’s acclaimed ‘Rabbit Hole’ single which was released in June to acclaimed reviews, and extensive radio support. ‘Into The Woods’ is a continuation on the theme of twisted fairytales.

‘Into the Woods’ is a response to the reoccurring plot-line in stories and films, where women are often chased into the woods by bad men, pursued by monsters or face great peril amongst the trees. Into the Woods instead becomes a place to grow, gain strength and face your fears.

SERA doesn’t mess around when it’s time to begin telling the story with the strumming of guitar and vocals jumping straight in with the simplicity of her vocals allowing the lyric and the story taking position into the spotlight. As soon as the chorus hits, SERA  takes you on a rhythmical journey all of her own ‘Into the Woods’.

SERA’s new songs will continue to follow in this theme of the mythic-surreal rooted in very real experiences. The track is taken from SERA’s collection of songs for 2019 and from her new collaboration with producer Andi Bonsai.

SERA hails from Caernarfon in North Wales and is a busy bilingual (Welsh and English) performer and songwriter, part of the CEG Records family. Earlier this year SERA was selected as a part of BBC Horizons programme, in which the BBC back a dozen of the freshest acts in Wales and provide them with festival showcases and industry opportunites.