Having worked with brands such as Gibson Guitars, Topman, BooHooMan and stared in popular movies such as ‘SPUD’, alongside Casper Lee and Troye Sivan, as well as Netflix’s ‘The Kissing Booth’, multi‐instrumentalist Byron Langley returns with debut EP, ‘Light On EP’.

Byron’s silky melodies and imaginative imagery is painted across an indie‐electronic canvas that eases like a breeze into the ears.

Originally from South Africa, Byron began uploading to YouTube back in 2018 and quickly accumulated a huge online following which stands at over 400,000 followers across YouTube, Instagram and Twitter. His close friendship with Strictly Come Dancing Star Joe Sugg and mega YouTuber Casper Lee skyrocketed the young singer-songwriter’s music career, with over 1 million streams on Spotify, multiple Spotify Official playlists including New Music Friday and brand collaborations with Apple Music.

Bryon Releases his Debut EP, ‘Light On’, Today 3rd December and we had a chat about the EP among other things. 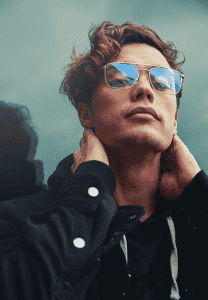 Tracey: Hello Byron, nice to cyber meet you! Since you’re an all-rounder, (not a square at – all) Actor, Model and Singer/Songwriter/Musician. What came first and do you recall your first job?

Byron: Hey Tracey, nice too cyber meet you too, how very 2019 of us. Acting came first and then modelling followed shortly after. My first ever job was selling chocolate brownies at school. It turned in to a little empire that was eventually shut down due to the alarming amount of chocolate fingerprints everywhere, at least that’s why I think they shut me down.

MT/Tracey: Who introduced you to the world of modelling and acting?

Byron: My grade 10 drama teacher put our class forward to audition for a film in 2010, after a few call backs, much to my surprise, I got the job. I worked as a bartender after that and a local creative director scouted me at the bar to do some modelling for a local South African fashion brand, everything kinda picked up after that.

MT/Tracey: What is it you enjoy the most? (I’m talking about what’s in the circle of roundness btw)

Byron: I enjoy writing songs the most, I sometimes really dislike it but I think that means you care, right? 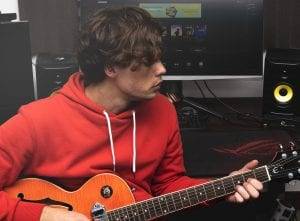 MT/Tracey: For those who don’t know who you are, (where have they been??) what is it that you think you are well known for the most, to date?

Byron: I am probably most known for featuring in ThatcherJoe Vlogs on YouTube. I lived with Joe for 18 months when I first moved to London and was exposed to his giant audience then.

MT/Tracey: How would you describe yourself, what kind of person are you? I.e. Kooky, Weird, Funny, Normal (whatever that is).

MT: So, you’re meeting your girlfriends’ parents very soon. Are you nervous? What do you think you’ll talk about?

Byron: I’d be lying if I said I wasn’t a little nervous. We’ll probably spend a lot of time talking about Emily ha-ha. Other than that, I’m excited to get to know them in general, they seem like legends.

MT: Do you have or recall any favourite scenes while you were in the filming of SPUD?

Byron: My favourite scene was during Spud 1 when “Fatty” got stuck in the window of the chapel. It was the first time I had ever seen special cranes on a set before and the scene was hilarious to watch.

MT/Tracey: You’re a very busy boy, and about to release your debut EP, before we get into the recording of the EP, what do you like to do outside of modelling, filming and music?

Byron: I love surfing, living in London makes that very difficult but I try to travel for at least 3 weeks of the year to Indonesia/Philippines/Taiwan and get as much surfing in as possible. 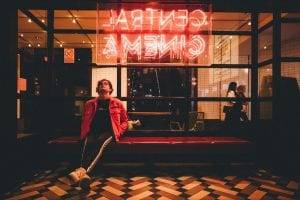 MT/Tracey: So, your debut EP is almost here; That being said, how are you feeling to the lead up? Excited, eager with this being your first EP?

Byron: I’m super excited to be able to release songs and get a response from the public in general so this EP release is no different. Most of the songs have already been released as singles so I have already gauged what the response is but otherwise I’m just a fan of the process.

MT/Tracey: Can you tell us how many songs you wrote on ‘Light On’ and what the EP is about?

Byron: In total I probably wrote between 10-15 songs. Some I will still release they just need some TLC; others won’t ever see the light of day. The EP is about my struggles with addiction a couple of years back and dealing with the consequences of that and ultimately finding the solution.

MT/Tracey: Do you collaborate song writing with anyone else and specifically for the EP?

Byron: Unfortunately, I didn’t have any collabs on this EP, it is something that I’m definitely keen to get into moving forward. The producer of the tracks, Christo (aka MusiCli), had a lot of input on the final product.

MT/Tracey: What’s the message you would like people to hear from ‘Light On’?

Byron: I’d love for people who are also struggling to have something to help get them back on track, even if it is in the smallest way.

MT/Tracey: I have to say, and I’m not just saying this, ‘Light On’ is a pretty amazing EP. It’s not boring, thank goodness! ‘Light On’ tracks are very different from each other; from electronic to rocky to slower folky style pop. Do you have a personal favourite and why?

Byron: Thank you very much, that’s very kind. The genres of the songs do vary quite a bit, I think that has a lot to do with finding a sound I like the most. My favourite track on the EP is Westside, it’s nice and big I can always feel like I’m in a movie when listening to it ha-ha. 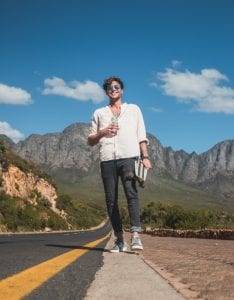 MT/Tracey: Where was ‘Light On’ recorded and who produced it?

Byron: The whole EP was recorded in my living room or else Christo’s bedroom / studio in East London. Christo Patricios (aka MusiCli) is the producer. The only track that wasn’t recorded in London was  Westside which was recorded in Cape Town.

MT: Will there be music videos for ‘Light On’?

Byron: We tried to shoot one in Croatia earlier in November, but the weather was not great at all, we were quite unlucky. Other than that, I’ve tried to accompany each release with a music lyric video.

MT: Any plans to tour with your music?

Byron: Yes, I’m looking at hitting the road in spring next year.

MT: And now, nothing to do with music, acting or modelling; Do you have any pets, if so, what are their names?

Byron: Haha, no pets I’m afraid, I’d absolutely love to get a dog though.

Byron: I have another EP coming out around springtime next year too. Otherwise thanks very much for the interview and all the best!

Australian Songbird Daisy Spratt Looking Ahead and Giving Back