‘Till’ I Find A Me To Defend’ From Lennox Lust 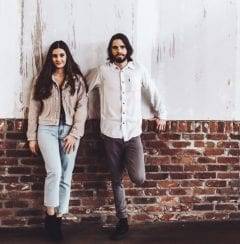 If I were you and you were me, would you still be my friend?

Mick Hambly and Lauren Valatiadis are Lennox Lust, a folk duo from Sydney Australia, whose single “Till’ I Find A Me To Defend”, sees the pair asking this question of each other.

Over a simple guitar lick, Hambly first asks the question in his dusky tenor. As the song builds, Valatiadis takes over vocal duties and repeats the question in a voice tinged with longing. The track reaches its peak as the duo come together to sing the final chorus, their voices sitting beautifully together – the couple’s understated harmonies a perfect match for the question that lays at the song’s heart.

I must admit that I am not usually a fan of folk music. It’s nothing personal – just that I work in the area of electronic music and don’t often take the time to explore the artists and songs whose acoustic sounds and songwriting approach can often be the antithesis of my own chosen genre.  But with Lennox Lust, I have found an exception (and perhaps a beginning). I will be seeking out more of their music and look forward to hearing the new record that I believe is on its way later this year.

Lennox Lust – Till’ I Find A Me To Defend