Hear Why Teenage Pop Singer Katie Kittermaster Will Be Huge

Katie Kittermaster is a British 18 year old singer/ songwriter. Her vocals are haunting, emotive and distinctive. Her writing is based on relationships, which resonates well with her target listeners. Her writing is fresh and honest. She’s funny and entertaining and her stories about her song writing are popular with the audience.
In August 2017 Katie performed to over 10K people opening for Louisa Johnson and dance group, Diversity.
In September 2018 Katie opened for Jools Holland and Marc Almond at Kimbolton Castle in Cambridgeshire. Katie supported Olly Murs in December in the same year.
Following on from her A Levels, summer 2019 saw Katie perform at many festivals including Penn Fest, Eldorado, Deebsday, The Big Feastival and CarFest.
Katie has opened for Ronan Keating at 2 gigs this summer and has just completed supporting
Boyzlife on their winter tour; playing 15 gigs over 22 nights. 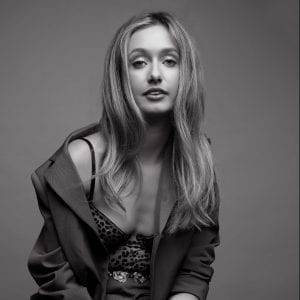 reams Of Playing at the Greek Theatre

MT/Danielle: You recently released your single “Sunday Afternoon”.  Can you explain how this title and the meaning of the song ties into your music goals?

Katie: Sunday Afternoon was a song that I wrote for my boyfriend as birthday present. It’s about being in a very comfortable and happy place in a relationship. I’m hopeful that this track is relatable to many people. My aim through my music is to connect with the audience but also allow them to interpret my music in a way that is personal to them.  The story telling in my music seems to resonate with fans, young and older and this is something that’s important to me as I would like my music to have longevity and mass appeal.

Katie: My first song was one called ‘Mine’. I sometimes listen back to it and realise that the structure is quite basic. I have learnt a lot over the last 4 years in terms of melody, build, timing and other elements but I think the core to my writing has stayed constant, in terms of the story telling approach. I haven’t had any formal training regarding my song writing and I am confident that with practice as well as collaboration, my songwriting will continue to develop. I would describe my sound as ‘acoustic pop’ with a hint of country perhaps. I want to retain my ‘sound’ and although some of my songs take a slightly different musical journey, I am keen that my vocal still sounds unique. I have been told that I sound very British and one fan mentioned that I sound quite ‘posh’; I always want to be true to myself and record songs that are ‘me’ but I don’t necessarily think that this means you have to pigeon-hole yourself to a certain style.

MT/Danielle: You’re originally from Kent, but you moved to Dubai for 3 years. Can you share how moving to Dubai changed your music career and opened doors for you?

Katie: I moved to Dubai when I was 11. I was lucky to get a few opportunities that not only opened a couple of doors but they also gave me confidence in my ability and the drive to work hard. I was involved in a school initiative which led to a few of us singing live on national TV and from this performance, I was then asked to open an event for The Global Gift Foundation; this was hosted by Eva Longoria and Ricky Martin and attended by 50Cent and Maxwell. Following on from this, I was also asked to perform at the Help For Heroes Charity event at The British Embassy. These two high profile events ignited a passion and made me realise that performing was something that I wanted to pursue.

MT/Danielle: You’ve opened for some amazing artists. Can you share some of the artists you have been able to open for and how those experiences have helped you grow as an artist? What has been your favourite performance to date and why?

Katie: I have been lucky. In fairness I have enjoyed all the performances that I have done, whether they have been with seasoned artists or performances in my local pub! My first major gig where I performed my original songs was at The Big Day Out in Maidstone. This was when I was 16. Louisa Johnson was headlining and other artists at this event included Atomic Kitten and Diversity. There were over 10,000 people in the crowd and although it was quite daunting, I loved it. I hadn’t actually performed any of my songs outside of my bedroom at that stage!!! So, this memory will always be very special. Since then I have opened for Jools Holland and Marc Almond, Olly Murs and Ronan Keating. The first gig with Ronan Keating was amazing at the most beautiful setting of Castle Howard, just outside York. It was certainly a very memorable night, as half way through Ronan’s set the heavens opened and thunder and lightning reigned overhead which caused the whole event to be called off. The second gig with Ronan was also very special. Once again, a stunning location, but what makes these events so special sometimes is who is there. A lot of family and some friends came to the gig with Ronan in Cambridgeshire and it means so much when you can share these moments with people who are close to you. Being on tour with Brian McFadden and Keith Duffy was incredible. Both of them are so friendly and supportive; singing on stage with them every night is something I will never forget. So generous of them to let me join them on stage and publicly call me ‘a female Ed Sheeran’. WOW. 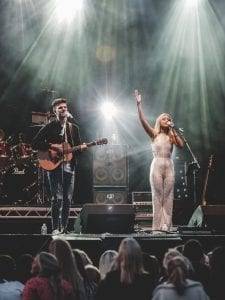 MT/Danielle: Who are some of your musical influences? When did you know music was your calling and when did you figure out why you needed to pursue music as your career?

Katie: This is hard as I listen to a lot of music. Ed Sheeran is a huge influence and inspiration. His back story is so motivational. Maisie Peters and Gabrielle Aplin are two other singer-songwriters that have definitely influenced my style. I love Lily Allen, Kate Nash and Joni Mitchell. I listen to a lot of music! I think ‘The Big Day Out’ event was probably when I realised 100% that this is what I wanted to do. Up until then I had sung covers of other peoples music. Music is central to my life. I cannot imagine not doing what I do. When I have had times that have been challenging, music has been a way for me to express myself and deal with things that are at times hard. It’s a very competitive arena and I am realistic about that. But, despite the fact the market is flooded and the odds are stacked against me, I will do everything that I can to get my music heard.

MT/Danielle: What has been your biggest challenge in your music career so far? How did you overcome that obstacle?

Katie: The biggest challenge was probably writing my first song. I had no idea where to start. I was feeling the pressure to write as everyone kept saying ‘you have a great voice, but you need to be able to write’. It’s not something that you can force. It wasn’t until my first teenage ‘heartbreak’ that this door unlocked and I’ve been a prolific writer ever since – there are over 30 songs ready to be recorded!

MT/Danielle: Besides singing, do you play any musical instruments? How long have you been playing them?

Katie: I play the guitar and piano – I use the word playing quite lightly. I have never had formal training and have taught myself what I know. I use these instruments mainly for writing but also play my guitar on stage. I am lucky to be sponsored by Taylor Guitars and Roland. 2020 is definitely my year to improve both of these instruments as it will facilitate my writing and my versatility.

MT/Danielle: What’s a typical day for you? Do you work on your music every day? What other activities besides music do you like to do that your fans may like to know about?

Katie: Since leaving school in June, having done my A Levels, I have been non stop on the road. The festival season was pretty busy with The Big Feastival, El Dorado, Carfest and others. Following that I went straight on tour with Boyzlife for a month. I am now on tour with Lucy Spraggan until mid December. I have a writing trip planned for January and will then be recording some new music. So, yes music is an everyday thing right now. But if I wasn’t ‘doing music’ I’d be with friends for sure. Touring can be quite lonely so I love to catch up with friends on days off.

Katie: Coming Home at Dawn will be on Spotify – it’s on pre-order now https://music.apple.com/gb/album/coming-home-at-dawn-ep/1480033715. As well as on the digital platforms, it is also available on my website shop page. The CD has been selling really well on tour; the sadness is that very few people have access to a CD player anymore. The music on Coming Home at Dawn is a body of work that I felt was cohesive. There are 2 songs on there that I wrote when I was 15 – Kaleidoscope and T-shirt. I think that it gives fans a selection of tracks that get them to know me as a person and artist. All the tracks are all written from personal experiences. I am pretty sure that my new music will be an extension and development of this music without detracting away too far.

Katie: I post as regularly on the social platforms about what I’m up to on tour. I try and show some behind the scenes stuff too. The dates are all on my website – Lucy has the tour dates on her site too. The shows have been very full/sold out as her fan base is huge and very loyal. It’s a great tour for me as I think our music is quite similar in some ways. As a support artist you have to work very hard to win the crowd over as they are clearly not there to see you; but thankfully Lucy’s fans are very respectful and I really get the sense that they are listening to my lyrics and enjoying the music; this response gives me a huge sense of gratitude and I feel very humble to be in this fortunate position.

LINKS TO KATIE BELOW