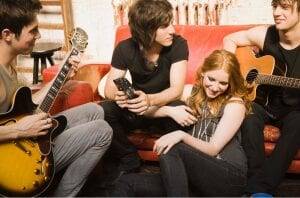 How to name your band and why it’s important.

Naming your band can be a rather tedious task for most, but for some, your band name may have come with ease through something that means something to perhaps one person or possibly more members of the band.

However, just because your band name has come with no real effort and may have a specific meaning that only you and your band understand, this does not mean it’s a great name.

Too often do I see names that are hard to pronounce, let alone spell regardless of their meaning.

To be quite honest, no-one cares about the meaning of your band name, and if you need to explain your name or spell it to anyone, then remove it from the list.

On the other hand, some bands try way too hard to create or try to be ‘Clever’, naming their band, resulting in something that is almost as useless as Supercalafragilisticexpialidocious (or however it’s spelt)

People don’t and won’t, consistently move backward and forward from either email, or other sites to check the spelling if they are searching for you on the net. Furthermore, they will not be able to remember it well if they would actually like to find you and hear your music. All they will remember is that it was a weird name beginning with a certain letter perhaps.

When choosing your band name, make it a joint effort with other members of your band.

Make it something that suits your music and sound.

What do I mean by this?

Let’s say you’re Jazz band. You wouldn’t name your band something heavy or hard, like, ‘Metal Blowtorch’ (example only)

This would be best suited to a heavy metal band.

Some tips in helping you find a great simple name is to combine the name of something familiar with a feeling, object or doing word.

Here are a few examples:

The Next Big Thing

You could go beyond and mix and match the list and elaborate.

If you like the meaning of a word, but it just doesn’t cut what represents you, then simply google the ‘another word for ……’ to see what else you could substitute.

Go through pictures on the net, and get some ideas, you never know how something so simple can spark new ideas.

When you think about great movie titles, you will notice they are usually two to three words and very simple.

For example: Led Zeppelin, Pink Floyd, The Who, The Smashing Pumpkins, Panic at the disco…

Try to select a few names, then check if it’s legally available, check domain names availability, social media handles should entail the exact band name for every social media channel. If an exact match is not available on a specific social media channel, DO NOT add a number or extra characters. Add an underscore between the words. This way no-one has to try and remember your different handles for various social media platforms.