Cheyne Greene, pop and alternative singer/songwriter who grew up and lived in Dubai for the majority of his life. Born in Dundonald, Ireland in January 2002, he started singing at a very young age and began learning the keys at 9 years old. Throughout his music career, he’s performed at school music venues showcasing the types of music he writes and songs of artists that he loves to listen to.

As someone who loves to write his own music, he focuses a lot on the alternative side and really wants to create his music where every track has a different style and tone to it. 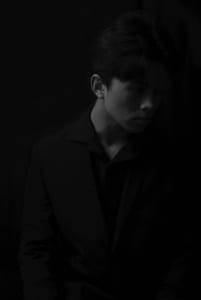 His first EP “Into the Night” is a body of work which he’s extremely proud of and contains the tracks that’s most resonated with him when he started songwriting.

Danielle: You recently released your album titled “Into the Night”. Can you explain the title and how this title reflects your music goals? You have four songs on the album, can you give your fans a little insight into the meaning behind each song?

Cheyne: All these songs on the EP were written back when I was 14-15 and are the one’s that’s most resonated with me when I started songwriting. None of these songs were based on my own experiences and were based more on my own imaginative thoughts and ideas.

The first track “Into the Night” which I used to title the EP tackles a man’s breakup and his own refusal to go into the deep dark depression which I symbolize as the night. The one he’s in love with still remains in the daylight while he’s slowly transitioning into the night. I find it very interesting as well as it’s this massive electro pop track however the lyrics are actually very sad. How the title reflects my music goals? Well I’m not going to say I’m moving into a state of depression, but I can see this track to be more of a push to get me out there more to others around the world as one of my goals is to write records that resonate with people’s hearts.

The second track on the EP “Say Goodbye to Melodies” was a scenario I came up with where a soldier who had left his loved one and his home to fight for a war immediately comes to regret and wants to see his loved one again. He experiences many lives that are lost through the shocking moments he endures and here I symbolize that each life lost within the war, it represents its own melody, its own motif. While this soldier is continuously saying goodbye to the melodies within the war, he wants to hold onto his own memories with the loved one he so desperately wants to see again.

“Today” and “Watching You” are both connected to me, with “Watching You” being more of a sequel to “Today”. They’re about a man who constantly checks on the one he loves bedridden. His insanity and him being unable to know if she’ll be better when he remains astray from his path are reflected off the heavy guitar played throughout “Today”. The pop-rock track “Watching You” shows that he’s finally pulling himself together and will continue to remain by her side.

Danielle: You were born in Dundonald, Ireland and then moved to Dubai. How did growing up in these two locations influence your music?

Cheyne: When I was born in Ireland I only lived there for a few months haha. So it was mainly Dubai that influenced my music with me growing up and listening to what everyone else listened to; Justin Bieber, Taylor Swift, Charlie Puth, or Shawn Mendes. I’ve seemed to move off from that path now and listen to more alternative and contemporary music. I look into ways of how I can blend other genres into my own style, so occasionally I’ll come back to pop music to see if there’s anything that catches my attention.

Danielle: It’s well known that you like to write your own music. Have you ever collaborated with anyone? Who are your musical influences?  If you could pick any one artist to share a stage with, who would that be?

Cheyne: Other artists? No, I haven’t yet but I really look forward to in the future. My musical influences I’d say come from a number of artists. The two major ones being Declan McKenna and Tom Odell. The creativity in their songs is just outstanding for me. Tom Odell is also an artist I’d love to perform with. I watched him live a few months ago in Dubai and my piano playing can’t even compare to his. The effort that he puts into his live shows amazes me so much that I actually aspire to be like him one day.

Danielle: If there was one message your fans could take away from your music, what would you want that to be?

Cheyne: Not to take anyone or anything for granted. You won’t realize someone or something is there until they aren’t anymore.

Danielle: How long have you been singing? When did you know that you wanted a career in music? Besides singing, do you play any musical instruments?

Cheyne: I started singing at a very young age, I think I was around 3. My family background was always very musical, my grandmother was a stage actress who played the piano, violin, and had an incredible singing voice. She had amazing vocal control and her range was amazing. My father also just loves music, you could show him any song from the 1960s to 90s and he’d know it immediately, he’s an absolute music guru. And I guess this all kind of rubbed off on me. When I was 8 I started learning the guitar and a year later I began learning the piano although I hated learning them at the time because I was playing classical and had no interest for it. It was when I was 12 and started writing my own stuff that I profoundly grew a love for music. Then I realized that this was what I wanted to do, this is what I would enjoy doing for a career.

Danielle: What’s a typical day for you? Do you work on your music every day? What other activities besides music do you like to do that your fans may like to know about?

Cheyne: I used to work on my music every day. I’m so focused on school now that I can hardly find the time for it. When I graduate however I’ll go back to working on it every day just like I used to. I remember going crazy when I turned 14, I would sit at the piano every day coming up with vocal melodies and recording anything that would come to my head. It’s a lot of fun when you can piece together chord progressions that work and it’s more enjoyable when you can write lyrics to it that actually fit and have their own meaning. Do I have any other activities besides music? That’s the thing, I don’t. I know, I’m a very boring person haha.

Cheyne: I gave a small heads up on one of my posts that I’d be releasing an album next. I don’t know how long it will take but I plan on producing the whole body of work. Currently, I’m performing at local open mic nights around Dubai so anyone living there feel free to come!