Australian country megastar Casey Barnes has today released his energetic new single Come Turn Me On, a track that reminds us that there’s nothing better than coming home to the one you love. Casey has also announced a dynamic, thrilling, neon-soaked video to accompany the track.  To celebrate Come Turn Me On, he’ll be hitting the road, kicking off in Adelaide for the Fringe Festival (Today) on March 7, then moving through Prince Bandroom Melbourne, Mathinna (Tas), Winton’s Way Out West Fest, Gippsland Country Music Festival, Toowoomba, the Gympie Music Muster on August 26 and 27 and wrapping up at Savannah In The Round (Mareeba, QLD) on October 1.

With a bunch of chart-topping singles (and albums) already under his belt, Casey Barnes is headed straight to the top again with Come Turn Me On. Evocative of country/pop crossover masters Dan + Shay and Keith Urban, Come Turn Me On is a firecracker of a single, comfortably at home on both country and pop radio and playlists.  Written by Casey and Nashville-based songwriting duo Brown + Gray (who also co-wrote Casey’s number one singles Sparks Fly and We’re Good Together) and produced by production duo MSquared in Australia, a pounding beat and hooky guitars characterise this enticing track.  Speaking on the inspiration behind the song, Casey explains, “I’d like to think that we’re trying to shape our own unique sound at the moment.  I don’t really want to sound like anyone else…. With this single, it has that blend of modern country meets commercial pop which I’ve really connected with over the last few years.  The song is about a guy who’s basically travelled around the world, seen his fair share of girls but nothing compares to coming home to the one he loves.” 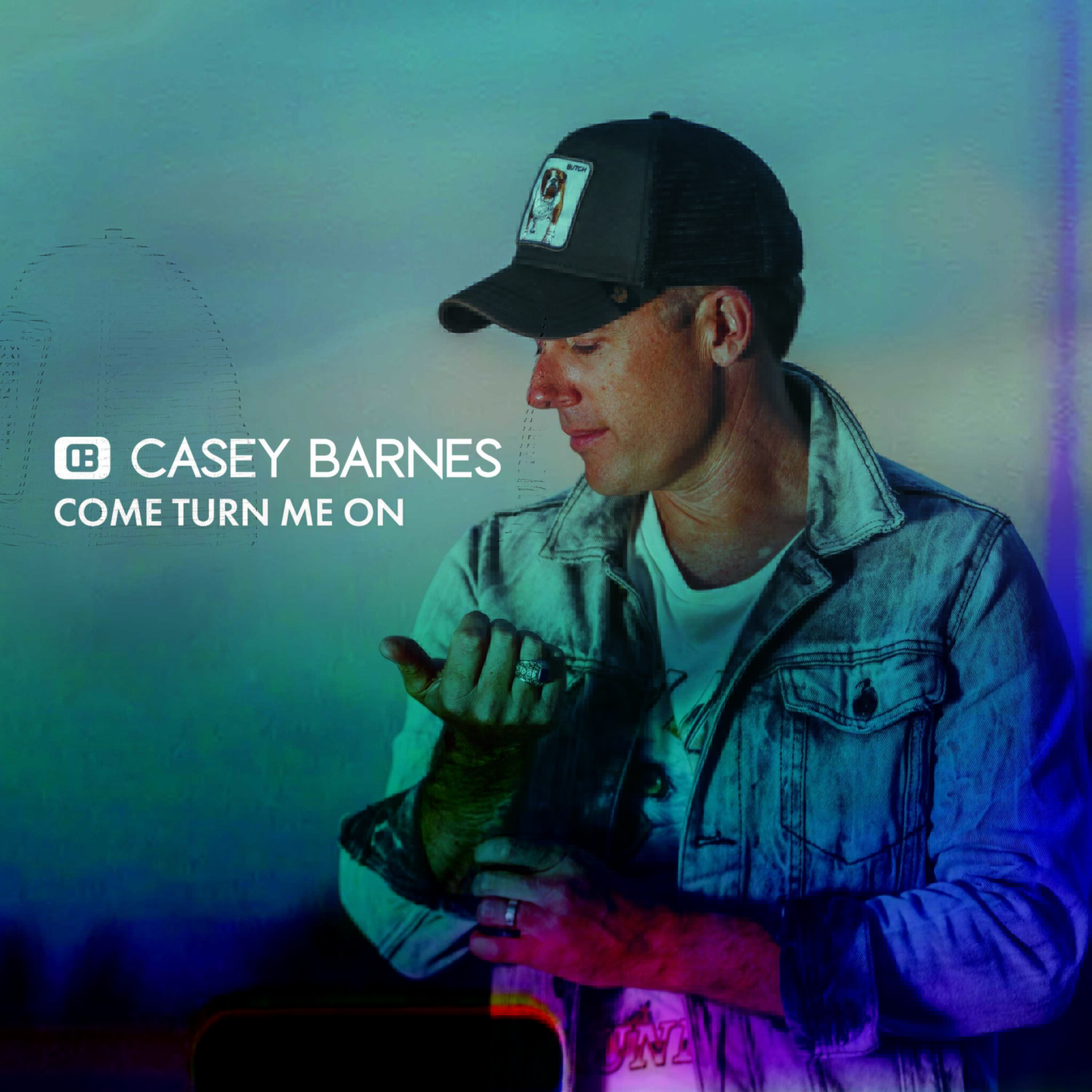 The video for Come Turn Me On is a full-on production – shot as though all in one take, the clip takes the viewer through a nighttime hotspot filled with neon lights and dark, alluring bars, with clever choreography and fun piece-to-camera moments.  Reflecting on the process of making the video, Casey says “We’ve gone all out with this video and I think it’s easily the most expensive clip I’ve shot to date – but we wanted to make sure this one was pretty special.  My wife Michelle is a creative genius and the whole concept for this video has been her baby.  Colin Jeffs from Ten of Swords Media has brought it to life.  We found this incredible venue in Brisbane called Smoked Garage which is a multi-level event space where each floor has a completely different look to it, so it was the perfect place to shoot.  The concept is that it’s one big party and everything has been made to look like it was shot in one take within the venue, culminating in a big high energy finale out in the side street at the end.”

Despite the global pandemic setback, 2020 was an epic year for Casey Barnes, seeing him nominated for ARIA’s Country Album Of The Year with his ARIA #1 Australian Country Album, Town Of A Million Dreams.  And 2021 is set to be even bigger with Casey already lapping up four Golden Guitar nominations (2021 Toyota Album of the Year, Contemporary Country Album of the Year, Male Artist of the Year, Vocal Collaboration of the Year), as he prepares to take his high octane live show around Australia to celebrate Come Turn Me On.  Fans can expect to see the country luminary’s consistently impressive vitality and killer performance chops on full display, with a massive set including all of his chart-topping hits.  Casey says, “I can’t wait to add Come Turn Me On into the set for all our upcoming shows!  We’ve actually created a brand new live show for 2021, and it’s great to finally see some major festivals and events coming back after the pandemic, which we’re thrilled to be playing at in the weeks and months to come.”

Come Turn Me On is out now. 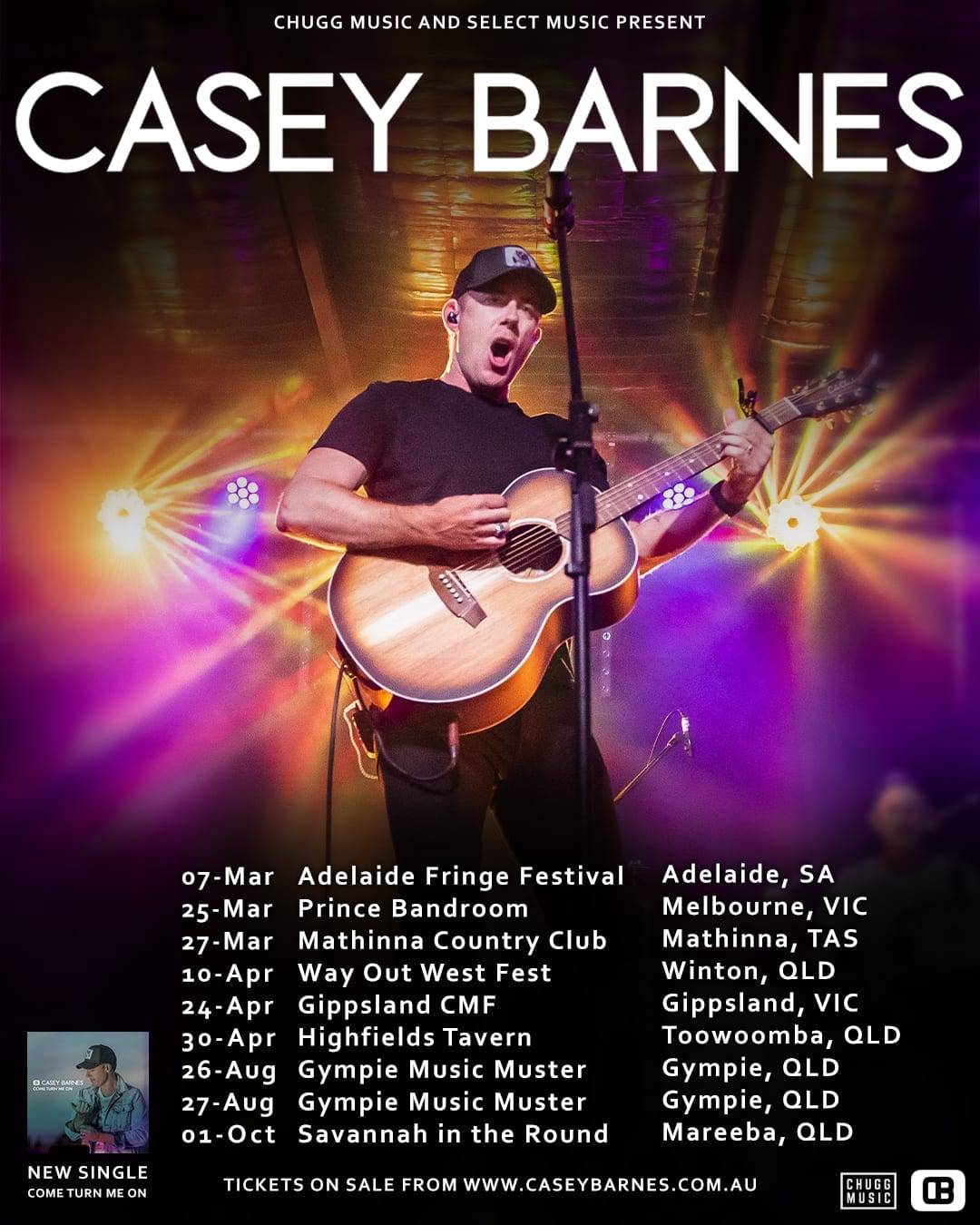 FRI 1 OCT | SAVANNAH IN THE ROUND, MAREEBA QLD | ALL AGES
Tickets available from www.savannahintheround.com.au/ 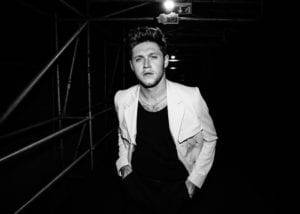 Global superstar Niall Horan has announced he’ll be bringing his critically acclaimed Nice To Meet Ya tour to Australia to celebrate the release of his upcoming sophomore album Heartbreak Weather, out March 13 – pre-order here.  Presented by TEG Live, the Australian shows will kick off in Brisbane on September 30 at the Brisbane Entertainment Centre, before moving through Sydney to play Qudos Bank Arena on October 2, and wrapping up in Melbourne at Rod Laver Arena on October 3.  This will be Horan’s second headline tour of Australia, who welcomed him with open arms back in 2018 where he played mostly sold out shows as part of his Flicker World Tour.

Thrilled to be including Australia on his worldwide tour, Niall says, “I am so excited to bring the ‘Nice To Meet Ya’ Tour to Australia. As you know it’s one of my favourite countries to visit and the shows and fans are always amazing!”.

Rolling Stone placed Heartbreak Weather on its list of the 70 Most Anticipated Albums of 2020 and praised Horan’s recent Saturday Night Live performances of  Nice To Meet Ya and  Put a Little Love on Me.  If these beautiful songs, plus the latest single No Judgement, are anything to go by, Heartbreak Weather is set to be an absolutely stunning body of work.  Horan is thrilled to bring his dynamic, impressive live show to fans in Australia, as he enthuses, “Can’t wait to be back down under soon! This is going to be a lot of fun”.

Originally from Mullingar, Ireland, Niall Horan has sold over 80 million records and toured the globe multiple times as part of the iconic One Direction.  With his full-length solo debut  Flicker (Capitol Records), he achieved massive global success and widespread critical acclaim.  The album entered the Billboard 200 at No. 1 in October 2017, debuted at No. 2 on the ARIA Album Chart and soon earned Platinum certification or greater in 20 countries, including the U.S.  In addition to surpassing three million in worldwide adjusted album sales and 3.5 billion global streams worldwide, Flicker topped the iTunes Top Albums chart in 61 countries.  The album included the 2x Platinum single This Town, and the 3x Platinum Slow Hands.  Horan’s Flicker World Tour included sold-out dates in the U.S., Canada, U.K., Europe, Singapore, Japan, Brazil and Australia. 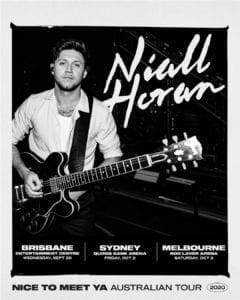 General public tickets will go on sale at 2.00pm (local time) on Monday 2 March from www.ticketek.com.au,