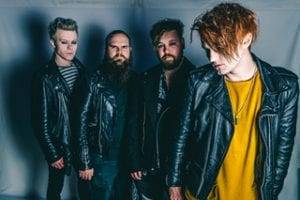 An eye-catching alt-rock outfit based in West Yorkshire, England, known for their bombastic live shows and die-hard fanbase. Proudly genre-defiant, the ‘aggressive pop’ group have self-released two EPs, 2016’s ‘The Hospital Party’ and 2018’s ‘Where Lost Things Go’, the latter of which debuted at 43 on the iTunes Alternative Albums Chart. The band’s latest single, ‘We Go Down Together’ was released on November 8th 2019 and is supported by their most ambitious, cinematic video yet.
All music to date produced by Romesh Dodangoda (Bring Me The Horizon, Bullet For My Valentine), with support from a host of outlets including Kerrang! Radio, Rock Sound and BBC Introducing. They have spent the time since their first release supporting countless touring artists, heading out on a number of their own UK tours, a headline European tour, and making appearances at festivals like Download, Bingley Music Live, Whitby Goth Weekend and Camden Rocks.The band currently consists of Mikey Lord (vocals), Adam Doveston (guitar), Jason Doveston (bass) and Bailey Roper (drums).
On the single Mikey Lord says: ‘We Go Down Together feels like the perfect song for us to come back with. It feels like it’s been forever, and it feels important that whatever we put out now feels like we are unleashing something a little dangerous into the world. It’s different enough to excite us and to get the fans perked up, but it’s also kind of the ultimate ‘As Sirens Fall’ song. I wanted to make people move and feel in a way we hadn’t before and I sincerely hope we’ve achieved that here. This is a song for the weirdos. It’s a song for the people who have tried to fit in and who feel like they didn’t succeed in fitting in.     Be you and be a mystery. Be hard to pin down. Don’t pigeonhole yourself. Be whatever you want to be and do whatever you want to do. Love with everything you have and never let them take you alive. I really hope people can find something to get their teeth stuck into with this and that they pull some positive messages from it. I know I have.’
The band head out on a full UK tour with Sumo Cyco and Suburban:
Nov 24th – The Joiners, Southampton
Nov 25th – The Globe, Cardiff
Nov 26th – The Exchange, Bristol
Nov 27th – Rebellion, Manchester
Nov 28th – Underworld, London
Nov 29th – The Craufurd Arms, Wolverton, MK
Dec 1st – The Key Club, Leeds
Dec 2nd – The Classic Grand, Glasgow
Dec 3rd – Think Tank, Newcastle
Dec 4th – Mama Roux’s, Birmingham
Plus:
Dec 21st – The Birdwell Venue, Barnsley with Hands Off Gretel, Frank Grimes, Eloise Kerry.

LINKS TO AS SIRENS FALL

New Hypnotic Alternative Rock from Dip Road in The mallee