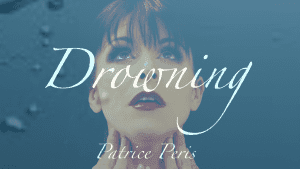 Patrice Peris  is at it again with her latest single release “Drowning.”

I have to say, this is most likely the best I’ve heard Patrice sing with an expressive vocal creating an original and unique style and essence with ‘Drowning’.

‘Drowning’ is one of those songs that you still hear after you stop playing it, which is a good indicator of a well written catchy pop song.

The production entails a driving beat drum loop which moves the track along.

‘Downing’ is radiating off the heels of the success of her previous single, “The War,” which, between the acoustic and remixed version, accumulated a combined viewing total of over 100k. Peris’ newest Pop/Dance track plays again with a fun uptempo beat with more serious lyrical content.

When discussing the meaning behind the song and her choice to go the same route stylistically as “The War,” Peris, says,

“For me, I feel like the best way to express myself as an artist is through lyrical content. But in the same sense, a big part of me is not serious and sad all the time so to combine the elements of pop dance, up-tempo tracks with more emotional, thought-provoking lyrical content is kind of the best marriage of the two worlds. I don’t know anyone who has not been around someone who just kind of sucked the life out of them. Drowning came about from this idea. I use the metaphor of drowning because in these relationships it is almost like they drain you of your energy, leaving you lifeless.”

“Drowning” is now available on all music streaming platforms!