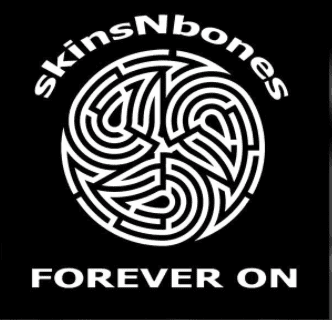 skinsNbones is a collaboration of Aussie muso’s featuring the powerhouse voice of Jason Kafoa, forming in December 2019. From diverse backgrounds and experience but all with a love of rock music.

Together we’ve created a sound all of our own, based around thumping rhythms, in your face brutal guitar and soaring melodies, sung with one of rock’s most dynamic voices. Keeping it simple, all feel and no frills. By sicking to this formula we’ve produced new 6 ball Aussie classic rock anthems which appeal to all generations. Our songs have meaningful and thought provoking lyrics written about real life issues that extend to social issues and the questions these issues raise.

One reason our logo is a “?” is skinsNbones like to raise questions and/or issues to get people to think, to question, to use their discernment, even with what we’re saying. Increasing awareness and perception, being able to discern what is and is not, is vital these days.

We are not about self promotion but the promotion of the issues our songs raise.

1.   skinsNbones feel strongly about reducing stigma associated to mental dis-ease, or what Bones the lyricist calls “mental difference” and asks: “What would the world be like without mental difference?”

Einstein, Nikola Tesla, Isaac Newton, Beethoven, Van Gogh, Da Vinci, Michelangelo, we could go “Forever On”, all had mental dis-ease/difference. Without them thinking and seeing the world so differently where would we be? No E=mc^2! No understanding of electrical energy that we’re now only just using! and the art! Where would we be without such beauty?! Such inspiration!

2.   Keeping it short, the 2nd story is finding the inner light within Self, or from a higher Source, from tough experiences and using them to become more enlightened, a better person, fully accepting that mis-takes will be made, “wrongs”, that will be used to grow and not to put one’s Self down but help lift them up. Use “the rocks that tripped (you) up” as stepping stones for others. Use all ways to learn, grow and burn brighter and brighter in Spirit “Forever On”. skinsNbones promotes how beneficial Self growth is, especially from hard times. That becoming a better being, not a bitter being, is healthy for not just your Self but also the world around you.