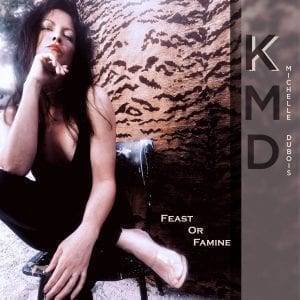 Atlanta-based indie pop artist K Michelle DuBois  presents her new single ‘Feast or Famine’. A percussive foundation akin to Kate Bush ‘Running Up that Hill’ and a synth-heavy full-on 80s style production serve as a backdrop for a cheeky delivery of lyrics conveying obsession with another.

This single comes on the heels of her single ‘Waves Break’, an upbeat and fun track foreshadowing her forthcoming album, which will be released in early 2020.

“I’m releasing this one a bit under the radar as I’m yet undecided whether this will be part of the full album releasing early 2020. It’s got a more commercial vibe than I usually put out there, which makes me feel shy about it, but I love it! The new album collection is a bit heavier than this tune but I myself do enjoy an eclectic mix so maybe,” says K Michelle Dubois.

K Michelle DuBois got into music very young, building harmonies to pass the time during the family’s frequent road trips. She began writing her own material as a teenager in Nashville after receiving a bass guitar for Christmas. Initially crafting her early songs on bass, a Yamaha synthesizer and a drum machine in her parents’ four-track studio, she experienced a flood of creative possibilities upon discovering open-tuning on acoustic guitar, thereafter solidifying her commitment to songwriting.

After forming her early band Ultrababyfat and releasing ‘Silver Tones Smile’ (1998), the group’s infectious pop-punk sound garnered national attention, leading to opening slots for numerous noteworthy acts Pavement and PJ Harvey, and a 2001 stint on The Warped Tour as one of the few female-led bands showcased in the festival’s lineup.

After the band disbanded in 2005, DuBois formed Luigi to explore her more progressive, art-rock leanings. After seven years together and ample critical acclaim, she re-emerged as a solo artist under the tempered guidance of producer Ben Price at Studilaroche, releasing her debut album ‘Lux Capone’  in 2012. DuBois also contributes vocals for Atlanta-based dream-gaze collective Parsons Rocket Project.

‘Feast or Famine’ can be found via online stores, such as iTunes, and streaming platforms such Spotify, where you can also find ‘Waves Break’. It is also be available through Bandcamp, along with her latest ‘Harness’ album. (links below)

LINKS TO THE MICHELLE DuBOIS