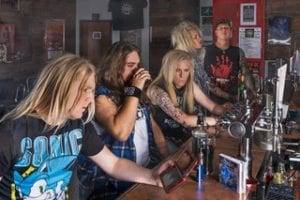 The UK’s finest purveyors of Hair Metal, Midnite City return with their new single ‘Here Comes The Party’, the ultimate Friday night high energy, feel good rock anthem of the year taken from the bands second album ‘There Goes The Neighbourhood’ is out now!
They were formed in January 2017 by current Tigertailz front-man (and former Vega, Steevi Jaimz and Teenage Casket Company member and songwriter) Rob Wylde.
Armed with an album’s worth of material, Wylde approached friend Pete Newdeck (Newman/ Eden’s Curse, Blood Red Saints) to produce three songs for him to shop to record labels.
The songs ‘Nothing’s Like Losing You’, ‘Summer Of Our Lives’ and ‘Think About You’ were then sent out to labels and garnered considerable interest across the board, resulting in a deal being inked with German label AOR Heaven.
With a record deal in place, Newdeck officially joined the band as drummer in the Spring of 2017, alongside Miles Meakin on guitar and Shawn Charvette on keyboards.
With the line up now in place, the band began work on their debut album at PNP Productions in Tewkesbury UK, completing the recordings in June 2017.
With a sound that the band describes as ‘Timeless, melodic rock/ hair metal’, MIDNITE CITY cover all bases when it comes to this much loved genre of music. From ultimate feel good, party rock anthems, to brooding melodic rock monsters, to spine tingling power ballads, they are all here in abundance, and then some.

Following on from their explosive self-titled debut album which took the world by storm last year, MIDNITE CITY return all guns blazing with their sophomore release ‘THERE GOES THE NEIGHBOURHHOOD’ – eleven tracks of fist pumping, high energy, feel-good, hair metal of the highest order! The lush melodies, huge choruses and gargantuan hooks found on their debut album are all here in abundance alongside some true modern day glam anthems, fun commercial party rock, moody mid-paced hard rockers and heart wrenching power ballads big enough to light up an entire arena.

As with the first album, the winning formula has remained – all songs have been written by Rob Wylde, whilst Pete Newdeck has once again taken control of production, engineering and mixing duties.
With ‘THERE GOES THE NEIGHBOURHOOD’ the band has literally stepped everything up several notches to unbridled, head splitting proportions. The guitars are big, the drums are huge, there are walls and walls of harmonies and more synths than you’d find this side of a classic Bon Jovi album. In a nutshell, this album has everything but the kitchen sink!
MIDNITE CITY’s sound is tighter than ever before, so if you long for a band that still look, sound and perform like those long lost million selling forgotten bands of the late 80’s/ early 90’s, MIDNITE CITY and ‘THERE GOES THE NEIGHBOURHOOD’ is the album for you.
On the song, Rob says: “Here Comes the Party” was written about escapism. About breaking free from the everyday chains and pressures of life, letting go and having the time of your life!
2020 Dates
Mar 8th – Melodic Rock fest, Melbourne (Australia)
May 6th – Hard Rock Hell Ibiza festival
May 6th – Black Box, Athens (Greece)
May 23rd – Breaking Bands festival, Bromsgrove
May 29th – Call Of The Wild festival, Lincolnshire
Aug 30th – HRH Sleaze festival, Sheffield
Sep 5th – Indoor Summer festival, Hamburg (Germany)
October 16th – Gravity festival, Cannock