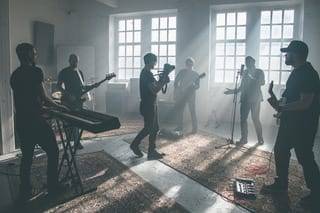 What began in 2008 as a local cover act built by guitarist Alan Hunter and bassist Scott Crawford quickly evolved into a hungry revival of genuine rock n roll known as Emerald Sunday.

The 6 piece from Dundee bring their own twist on classic RnR, mixing with melodic hooks with foot stomping choruses that have fans singing all the way home in Angus.With a well-rounded line-up including Mike Martin, guitarist Matty Fleming, drummer John Morgans and Andrew Taylor, Emerald Sunday have spent their last few years building a fan base by performing with popular acts such as Primal Scream, Big Country, Embrace, Example, From The Jam and more. After reaching success with two No.1 hits on the Scottish New Music Chart  ith ‘Streets Of Harlem’ and ‘Lay Down On The Highest Cloud’ plus a self-titled album that reached number 17 in the Amazon Rock Chart, the band is now producing their new LP“Willow” with the first single What Becomes of You out now.

On the song, Alan says “I was struggling through a track for an upcoming studio session that just wasn’t cutting it, but just before I put the guitar down a melody came out of nowhere and within 15 minutes the song was complete. I knew I had something special, and a week later it was recorded!”