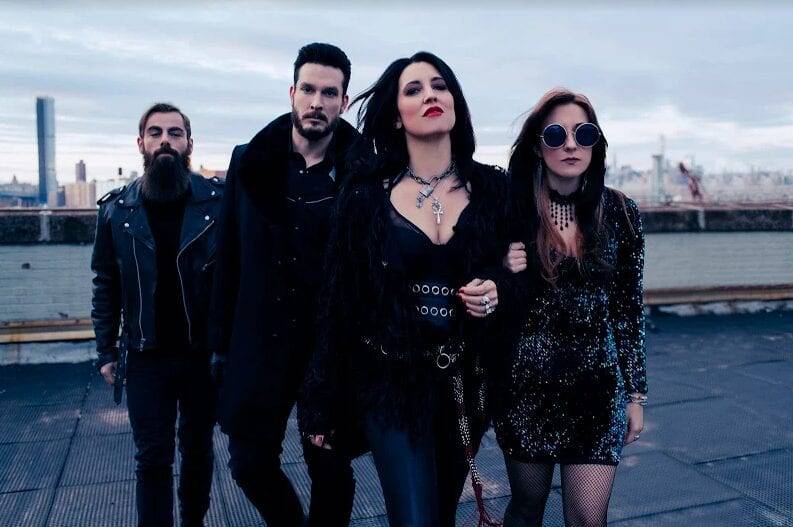 The album, produced and engineered by Geoff Sanoff (Bruce Springsteen, Fountains Of Wayne, Dashboard Confessional) is now available for pre-order / pre-save with three instant grat tracks, including the brand new single “Dangerous” (which had its debut on David Fricke’s SiriusXM ‘Writer’s Block’ show last night, and is this week’s “Coolest Song in the World” on Little Steven’s Underground Garage) as well as the tracks “Still I Rise” and “Evergreen.”

Soraia epitomizes raw power, unrelenting energy, chaos, and freedom. With a live show that is frenetic and intensely interactive, the band’s chemistry has been cemented through years of fierce, persistent touring from the dingiest dives to the most massive amphitheaters, helping them attract a worldwide fanbase.

Personal growth, rebirth, even revolution – such transformative concepts are the heart of what Soraia is all about. These heady themes inform the songs on Dig Your Roots, the band’s latest album, out today on Wicked Cool Records.

“I look at Dig Your Roots as a continuation of what was begun on Dead Reckoning,” says singer and frontwoman ZouZou Mansour of the new album’s relationship to their 2017 Wicked Cool LP. That record’s release prompted Rolling Stone/Mojo scribe David Fricke to write Soraia’s “searing guitars, burning soul and true CBGB grit…are the rock you need, in your face now.”

“Dig Your Roots is coming to terms with the light and dark inside myself and in the world,” ZouZou shares. “I come from a diverse multicultural and multireligious background – my father was Muslim and Egyptian, and my mother was Belgian and Catholic. I was ‘different,’ and I hid some of my background from people, thinking I wouldn’t be accepted. Digging my roots is being proud of who I am, letting it come before me even at times, being proud of where I come from, and asking the listener to do the same.

“Dig Your Roots also refers to loving what grounds you: the people, the lifestyles, the places you live, where you grew up. It’s being willing to dig up your roots and re-plant if where you are no longer keeps you free – metaphorically, of course. Inherently, I want this to be the message of the record: if you’re down, get up.”

As a spiritual descendent of iconic women in rock such as Patti Smith and Joan Jett, ZouZou’s Philadelphia-based band also embodies elements of kindred spirits of the ’90s and beyond – like PJ Harvey and The Kills, with more than a sprinkling of ’60s Garage Rock and Soul. Their primal sonic attack spreads a message of perseverance through trials of love, loss and letting go.

Bassist Travis Smith continues to be a crucial root of the Soraia tree, co-writing five of the album’s new songs with ZouZou, including “Superman Is Gone” and “Wild Woman.” “Travis delved into places on this album that we didn’t go to on the last record,” she reveals. “That’s scary. But he did it, which ultimately made me do it, too. It’s like, ‘Hold my hand, we’re going into this dark cave, and who knows what’s going to happen…”

Roots also finds drummer Brianna Sig with her first Soraia co-write, the enchanting “Don’t Have You.” “Her melody for the choruses reminded me of how The Sirens would lure sailors in Greek mythology,” ZouZou relates. “It was haunting and beautiful – and if Soraia isn’t both of those things, then I don’t know what we’re doing here.”

The band faced an unexpected challenge when guitarist Mike Reisman, who co-wrote four Dig tracks, including 2019 single “Evergreen,” left the group. “Mike can’t tour for longer periods of time anymore,” says ZouZou. “It hurt. He still works with us and we still connect. But you grow closer with who remains, and grow yourself.” Going forward, Nick Seditious is handling guitar duties.

Further nourishing their roots is the continued support of Wicked Cool’s Stevie Van Zandt. The label head has been an advocate ever since naming their breakout track “Love Like Voodoo” the Coolest Song in the World on his syndicated radio show and SiriusXM channel Little Steven’s Underground Garage in 2013. In January 2020, Dig Your Roots’ opening cut “Dangerous” becomes the tenth Coolest Song they’ve earned.

Van Zandt has even become a creative collaborator, penning “Why” for Dead Reckoning and co-writing two Roots tunes: 2019 Coolest Song “Still I Rise” and forthcoming single “Darkness (Is My Only Candle).” “I trust him more than anyone in knowing what I’m trying to say and who I am,” says ZouZou.

Complementing them in the studio once again is producer/engineer Geoff Sanoff, whose credits include notable work with Bruce Springsteen, Fountains Of Wayne and Dashboard Confessional. “He’s a member of the band when we’re in there,” ZouZou acknowledges.

Soraia has come a long way since their punked-up cover of The Kinks’ “(I’m Not) Like Everybody Else” hit #1 on Rock radio in South America in 2015. Their independently released debut album In The Valley Of Love And Guns from 2013 features five songs co-written with Jon Bon Jovi.

“I’m all about playing a fun song and throwing myself around, that’s Rock ’n’ Roll at its heart,” ZouZou remarks. “But I’m also about telling the stories of resurrection and life and hope and darkness.”

The latest release in Wicked Cool Records’ ongoing partnership with The Orchard as distributor, Dig Your Roots kicks off another busy year for the label, following up the success of 2019 Billboard Heatseekers Top 10 albums by Jesse Malin and The Dollyrots. Both Malin and The Dollyrots are already slated to release new music for the label in 2020, as are Wyldlife, The Empty Hearts, Ryan Hamilton & The Harlequin Ghosts and many more.