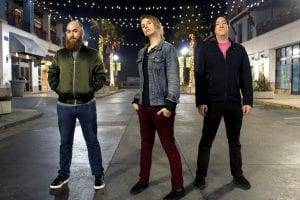 Classic rock with a new-school filter, Filmspeed rushes the ears and minds of all who hear the first few soulful notes of the infectious warning “Brain Dead.”

Punching the bass and drums like the Rolling Stones and the Kinks and pulling no punches lyrically, the single describes both the disconnect caused by media and the desire to rekindle a relationship with something more humane – whatever that be. Combining drummer Oliver Dobrian and bassist Nick Stout’s poppy yet hard, eager yet earnest riffs and rhythm and Craig Broomba’s yearning and rolling vocals, the band members act as alternative superheroes with this jangly call to arms and its brave, bass-y, backbeat. The power of Brain Dead gives raw rock ‘n’ roll and indie smoothness a run for their money in an effort to tame the echoing roar of commercialism with a beat that will get the listener as ready for anarchy as dancing.

The band had the following to say about the brilliant production masterminds behind the single.

“This went straight to analog tape, old-school rock n’ roll style. Minimal overdubs, just vocals and extra percussion, (you know, like sleigh bells and such). Mark at Station House in Echo Park really has that raw, vintage, and BIG sounding gear that feels cool even just hearing the playback. The producer on this track, Jason Hollis, is a true believer in both the rock and the roll. Anytime we get to work with him, we know it’s gonna be chock full of swagger.”