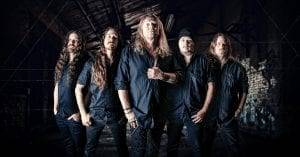 For the time being though, I will listen again and again to Tears of Rage, the second album from Swedish melodic metal band, Prime Creation. Consisting of Esa Englund on vocals, Robin Arnell on Lead guitar, Rami Tainamo on rhythm guitar, Henrik Weimedal on bass and Kim Arnell, Prime Creation make a version of metal whose roots can be clearly traced back to the New Wave of British Heavy Metal (particularly Iron Maiden), but that also incorporates so much more.

From the industrial sounds that open Pretend Till The End and A Beggar’s Call, to the groove metal riff in All For My Crown, the power metal choruses of tracks like Before The Rain and the constant nods to modern black metal acts such as Abbath, Prime Creation have molded a sound here that is greater than the sum of its parts.

At the heart of each track are the impressive vocals of Englund, whose style is obviously influenced by Bruce Dickinson. His delivery is underpinned by the awesome musicianship and songwriting of the rest of the band, whose songs move from the pummeling to the sublime and everywhere in between.

Standout tracks for me were Lost in Shade, with is Fear Factory-esque opening riff, Before the Rain (love that chorus!), All For My Crown and the driving power metal of the title track. Having said that, this is one of those rare albums that contains no filler at all – every track stands as a triumph in its own right.

This is simply one of the best metal albums I have heard in long time. I will be recommending it to every metal-loving friend I have. If I could give it a higher rating I would, but for now…