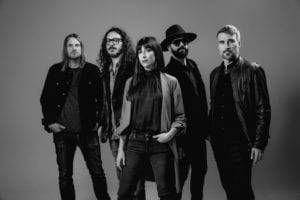 Foxy Mammals – Get Me Home

On the 20th, Feb 2020 (nice), The debut single/video ‘Get Me Home’ was released on YouTube via the project known as ‘Foxy Mammals’.

This sonic creature is made up of a collective of musicians from The UK, France & Spain that give you some good Rock flavour.

Two members formed the initial concept back in 2018 & we now have a unique hive mind of five.

The video for ‘Get Me Home’ is done in a sweet arty black & white feature that helps to drive home the opening riffage that slithers into your ears.

A track on the slower side without forgiving a solid groove rock soundscape that hooks you straight in.

Another global layer is this track was also mixed & mastered in the US by Nick Page who has engineered for B.B.King.

Okay, for the kids out there he’s also worked with Dave Grohl & a bunch more so basically the best mix possible has been provided here.

They will also be touring in 2020 so I’ll be keen to check out some Live gig capture as I’m sure they would put on a crisp performance.

Teach The World About Indie Music and Share
12
Shares