Chief State Could Easily Be Opening Up For Larger Bands 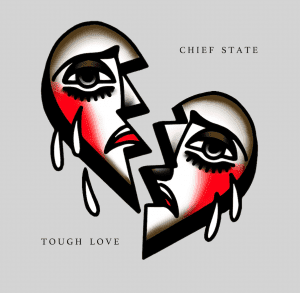 Had the pleasure to be re-introduced via some new blood ( they formed in 2016 ) who hail from Vancouver, British Columbia.

‘Chief State’ is a five piece of young lads who have an album being released late March through ‘Mutant League Records’.

Their new collection of songs has been titled ‘Tough Love’ & just a few days ago their new single (Reprise) debuted its video.

The track opens with high energy riffage & It’s matched with the angst-coated scream of,

“I’ll Tread Light Where You Lay, I Should Be Pushing You Away”

Ah now you see, that’s what I’ve been missing!

Catchy guitar licks follow to lead into an anthemic chorus, perfect for a bunch of punters to chant along to
while the clacking of skateboards is heard in the distance.

‘Chief State’ have stuck to the structure that has made this genre popular & it must be hard to bring something fresh to the plate.

Frontman Fraser Simpson’s lyrical content is written from personal experience & ‘Reprise’ has depth I hadn’t personally felt from punk in a long time.

These guys could easily be opening for larger acts & dare I say, leave some of the dinosaur bands thinking they need to step up their game.

Looking forward to the new album release but for the single I’m giving 8.5 Maple Leaves out of 10