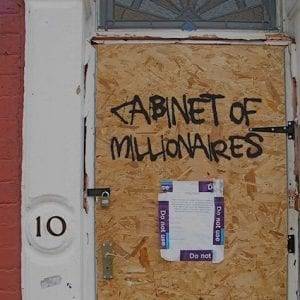 Cabinet Of Millionaires VS Zion Train

The British election is scheduled for the 12 December and it is fair to say that it will take place in a Britain that has suffered under the yoke of an austerity politics that has seen inequality increase and where the issue of Brexit has polarized the population. Into this space step Cabinet of Millionaires vs Zion Train and their “Stop The Coup” EP.

The politics of this track are clear – Boris Johnson is the clear villain and Cabinet of Millionaires launch a scathing attack on the current PM’s Conservative Party government, referencing the Grenfell Tower tragedy, the failure to take in enough refugees (whilst selling arms), and the dismantling of the country’s National Health Service.

Whilst this pull-no-punches political attack may sound unappealing to some listeners, what sells this track is the musicality and production. The original “Pfeffel Mix” is an exercise in dub-infused, slick electro with a soulful vocal that asks to “tell you about Boris”, interspersed with samples calling out the problems of Johnson’s policies. The second, “Darcus meets Acid House Therapy remix” takes the track and adds dubstep and acid elements, while the final, Mikk Stupp Remix, is a beefed-up drum and bass workout (and my personal favourite).

Whilst this track may not win over those who will follow the populist Johnson no matter what (a one-eyed devotion that is also shown by Trumpists on the other side of the Atlantic), it should nonetheless serve as a rallying call to those who may currently be prevaricating. Due for release on December 6 through Chocolate Fireguard Records, this is a timely track indeed.