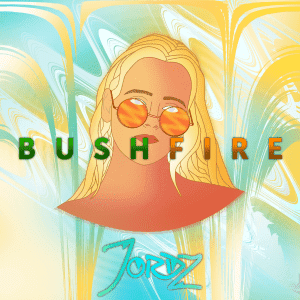 Those of you living outside of Australia may not be aware that large parts of the country have been up in flames throughout the month of November. Lives have been lost, properties have been destroyed, and koala populations have been decimated. So it was with a degree of trepidation that I pushed play on the track I was to review for this week – a track titled “Bushfire”.

The creation of 19-year-old Melbourne producer and DJ, “Bushfire” is a mid-tempo piece of EDM infused pop music that charts the artist’s flight from the encroaching flames that threaten to end her. Starting with the ominous sounds of helicopters, we soon find out that our protagonist is “stuck in a cloud of smoke” and that “there is nothing (she) can do”. Coupled with the melancholy instrumentation, we are left thinking that the narrative will have only one ending. However, the story reaches a happy (ish) conclusion and Jordz proclaims that “there is something (she) can do”.

Despite my initial misgivings, I was won over by this track. The narrative builds a quiet tension and the production is first rate (an opinion borne out by the fact that at just 16, Jordz won the Monash University ‘Emerging Producer Prize of 2017’).  It is encouraging to know that there are such talented young songwriters emerging in Australia. I look forward to seeing where this artist’s journey takes her.