They’re Quirky, Melodic, Unique, Yet Manage To Stamp A Mainstream Sensibility In Their Music | The Silverbeets

Indie Rock Pop band The Silverbeets are quirky, melodic, unique and yet manage to stamp a mainstream sensibility in their music. Ranging from 70s nostalgic rock to 2018’s Indie scene, The Silverbeets latest album ‘Stay Tuned’ is captivating and bloody good music. But hey, how about we just get frontman Farnz to give you the inside scoop! 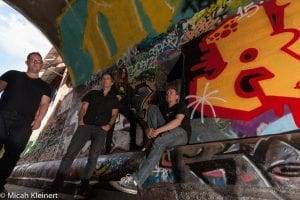 Can you briefly introduce yourself to the readers of Music Talks? Just a little bit on who you are, where you are from, what kind of music you do… etc.

Well we are The Silverbeets, a 4 piece band from Hobart Tasmania. We just play what we feel is right at the time. Mainly this would fall into an Alternative, Indie Rock Pop format and people have written we have a bit of Bowie, A bit of Pink Floyd, U2 and a few other bits from other artists but we sound like ourselves. So I guess we sound like what silverbeets that could play instruments would sound like. We each have a lot of different artists that we draw inspiration from and I think this comes across in our music, there is a lot of different influences going on.

Tell us about your latest album ‘Stay Tuned’. Was it specifically inspired by anything or anyone? Where was it recorded? Any ‘must tell’ stories from the experience?

It was just inspired by wanting to write a bunch of classic type songs, so that in some way shape or form could almost fit into many of the preceding decades from the late 60’s to now.  No overt single that stands out, hopefully because each song is strong and the album is stronger than the sum of its parts. It was inspired in that sense by those classic albums, the Dark Side of the Moon, Sgt Peppers those kind of albums. We could not hold a candle to those but if you’re gonna be inspired be inspired by the best right?

It was recorded mostly in my own studio, which I call Bad Radio Studios, except the drums were recorded over 3 different sessions at the Green Room and Red Planet studios. It was a long process of recording in part because I had the album ‘finished’ before I had the band. I was going to release it as a solo process, then Bill the drummer came along and we started jamming, had our first bass player join, then Jamie came along and everyone added their own sound and style that I took the album back to the drawing board and recorded the EP instead. Then started working on the album. So the weird part about this was that for a lot of the songs, 8 from memory, they had all the rhythm guitars, some lead ideas, the main vocal melodies, Some keyboard lines and various other sound bits and bobs. So kind of the ‘dressy showy parts’ and the whole foundation of a song which is normally the first part laid down, was in most things the last part. Outside of a few odds and ends that the producer laid in, the bass lines were actually the last thing added to the songs. Now that was a weird experience for recording an album.

What is your latest single ‘And I/You Thought’ about?

The first song that was released as a single off our Album – Stay Tuned is a song called And I/You Thought. Essentially it a song about my own two personalities, the shy withdrawn soul who hides away from life and the more gregarious outgoing side who just won’t let life beat him down. I think a lot of people have these 2 two personalities always fighting each other, like the old cartoons with the devil on one shoulder and an angel on the other .

As a band in Tasmania, do you feel isolated from the rest of Australia? Or are the musical borders no longer an issue?

The borders of the world are no longer really an issue in the digital age, that part is amazing, but there is still a bit of isolation. It’s a cost thing. Getting 4 people onto a plane to go to Melbourne Sydney or Brisbane is more expensive than 4 people jumping in a car in Sydney and driving down the Hume to Melbourne to play a show, so that part still probably means there’s some isolation, but it’s more a monetary isolation than anything else. Triple J and the Amrap AirIt community stations help bring artists to the rest of Australia no matter where you’re from in this large land.

Do you have any interesting / weird / funny rituals before going on stage that we should know about?

Like getting naked and asking for a single plum floating in perfume served in a man’s hat? Thanks Simpsons. Um, nothing weird, I reckon I have to pee about a million times before going on stage, I do tend to not be very social before a show. I think I am just focused on wanting to play as best I can and put on the best performance I can and there’s always nerves, no matter how many times I play and I think this is a good thing because it means that it means something.

What is next for you? Anything cool to announce or news to share?

Well we are just rehearsing and waiting for our guitarist/harmonist to be able to rehearse along with us as he’s been out being a musical director for a John X production down here in Hobart, which is really cool but it has put the brakes on being able to play live, so it will be good to hit the stage again very shortly. September 14 we have a gig. I think from there we’d like to put our hat in the ring for the Homebrewed stage of the Falls Festival this year. That would be pretty amazing. Then in the background start to look at new songs or old songs not recorded.