The Ramona Flowers have just released Strangers, their new album out on Distiller Records. The single “Out Of Focus” is the synth-based track that begins with a rhythmic drum groove and continues with an upbeat, addictive chorus.

Recorded at The Distillery in Bath with esteemed producer Chris Zane (Bat For Lashes, Friendly Fires, Passion Pit), “Out of Focus” is the The Ramona Flowers’ perfect balance between rock and electronica. Seamlessly meshing contemporary influences with timelessly anthemic melodies. The following 10 tracks hit a euphonic sweet spot reminiscent of M83, Phoenix and Everything Everything. 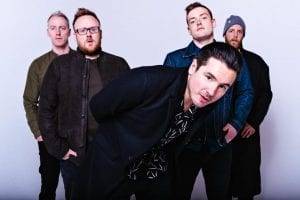 (*The plan to find a quite bar/cafe to sit and chat was certainly not on the cards due to the massive crowds celebrating the Melbourne cup in Sydney, but we did the best we could, with overbearing noise and heat issues.)

“For the whole album we were lyrically influenced by relationships within the band and life and things that have happened with friends and family. Musically we were influenced by bands like Phoenix, M83, Everything Everything, Bombay Bicycle Club, but we use a lot of 80’s synths, and have definitely been inspired by movies from our childhoods. We’ve always been into that 80’s cinematic sound.” – Steve Bird

The follow-up to their first two albums – 2014’s Dismantle & Rebuild and 2016’s Part Time Spies – Strangers is the sound of a band who have refined their craft through years of experience, experimenting with a breadth of styles to fully excavate their potential and discover exactly who they want to be. Now to celebrate the release of the new album, The Ramona Flowers have hit Australian shores to showcase these euphoric sounds at Australian Music Week, where they were hand picked.

“Out of Focus” is a testament to The Ramona Flowers’ uncanny ability to perfectly mesh rock and electronica with addictive, radio-ready hooks that constantly leave you wanting more and more. This magnetic song is the latest single off of the band’s recently released album.

LINKS TO THE RAMONA FLOWERS