Where many artists are wary of straying too far from home, both literally and figuratively, Michael Pignéguy (pronounced Pin-ay-gee) has had the pluck to investigate all sorts of music beyond his beloved jazz roots and to base himself in somewhere as improbable and exotic as Doha, Qatar. It was in this region he based himself for over a decade (2006-2018), before recently returning to Australia.

After taking up the piano by the age of four and the drums at nine, he knew music would be the focus of his life from early on. By the age of 11, Michael Pignéguy attended a jazz camp; and lets say the bug had bitten as there was no turning back. 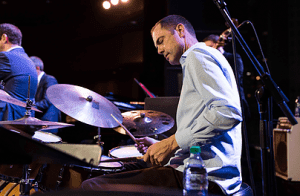 Having studied a classical-based degree in Auckland followed by the move to Western Australia’s Academy of Performing Arts, which led him to bigger things. Michael soon established his quartet which grew to a sextet, followed by large scale works consisting of full orchestra’s, experimenting with cross-genres of jazz, classical and Arabic music, he has worked with some of the worlds finest musicians while travelling the world from New Zealand to Perth to Abu Dhabi and beyond, there seems to be no stopping this incredible musician, producer, composer and arranger.

Michael was attracted by the softness of Arabic music, a quality reflected in his ongoing cross-cultural project, “The Awakenings Ensemble”, the gestation of which also lies in a desire for broad compositional colour options, especially from the percussion. Earlier in the new millennium he co-formed another project, “Salamander”, with renowned bass player Pete Jeavons, that had electronic beats and percussion as well as live drums. The Awakenings Ensemble, formed in 2011, picked up on that while also including horns, vocals and exotic textures. The first album, Speak, was recorded in Doha, Dubai, Perth and Melbourne, and includes musicians from across the world. Michael has always been interested in marrying idioms, as proved by anything from Jazz Meets Mozart to the pop projects, and the Awakenings Ensemble is just the latest step on that long road. An important collaborator in this area has been Perth producer and photographer, Trilby Temperley, who was the first person to challenge Michael’s more traditional notions of composition in the mid ’90s. Their completely different approaches to creating music have acted as catalysts to their respective areas of endeavour ever since.

Michael’s diversity, as well as his training and experience in jazz, made him an obvious focus for collaboration when Jazz at Lincoln Center (JALC) opened its second performance venue, this time in Doha. Since its opening just over three years ago Michael has featured numerous times in both straight-ahead jazz formats such as his quartet, as well as in large ensemble configurations and with The Awakenings Ensemble which included Arab artists in the performances. Highlights of these live outings have included trumpeter Dominick Farinacci, pianists Takeshi Ohbayashi and Richard Johnson, and acoustic bassists Matthew Rybicki and Jonathan Michel.
He has also recorded at JALC with a number of visiting artists including Matthew Jodrell (trumpet), Philip Kuehn (acoustic bass), Chris Pattishall (piano) and Dominick Farinacci.

To see so much more about Michael Pignéguy please visit his website with links provided below.

I was lucky to interview Michael today to learn more about his amazing life of music.

MT/Tracey: Michael, lovely to cyber meet you. Firstly, where are you from in Australia?

Michael: I was born in Crow’s Nest in Sydney. When I was still quite young my family moved to New Zealand and I later came back to Australia to study music. My family still live in NZ

MT: You’re a man of many talents, who are some of your influences of drummers?

Michael: There are so many incredible drummers across different genres and times from around the world, but I guess a very short list would be Buddy Rich, Peter Erskine, John Bonham to more recent performers like Taylor Hawkins, Anika Nilles + a cross section of Latin and Middle Eastern Percussionists

MT: Where did you study and what did you begin to study in music?

Michael: I did music through high-school as well as playing in various bands and orchestras and then ultimately went to the Conservatorium of Music in Western Australia at WAAPA (WA Academy of Performing Arts) to study jazz.

MT: What lead you to pursue Jazz?

Michael: My dad was probably the first person to introduce me to Jazz. He listened to artists like Dave Brubeck plus Ray Charles and Nina Simone. I had some exposure to playing jazz when I was around 11 or 12 years old and it was a very exciting experience that I remember very clearly. I’ve always listened to and appreciated a lot of different style and genres of music but the improvisatory nature of jazz is something which I love and affects my approach to all the music I perform and compose.

MT: You have spent a great deal of time overseas, living in Abu Dhabi, Dubai and Doha, why the move to these particular locations?

Michael: My wife and I had the opportunity to live and work there in 2006. We had considered living in places like the UK or the US but we felt that the experience in ‘The Gulf’, which is a rapidly changing part of the world with a very different culture, might be quite exciting, which it certainly was. I guess one of the reasons we stayed for quite a while is that there is a very interesting mix of cultures and nationalities from across the globe and I met and performed with so many different artists which I then wrote and recorded with.

MT: Along with your incredible drumming, you are an incredible composer, arranger and producer and have been commissions to open highly profiled Festivals, the 250th anniversary celebration of the birth of Mozart, centre openings such as the Lincoln Centre, commissions for writing huge orchestrations for the likes of ‘When Worlds Collide’ among them and worked with some of the most renowned musicians in the world; when did you release your first album and how many to date?

Michael: I actually released my first album in 1998, it was entitled MPS Live (Michael Pignéguy Sextet – Live) which was recorded at a classic club in Perth called Greenwich. We followed up with a double album called PURE in 2000 which featured iconic Australian saxophonist Dale Barlow, who also co-produced the album. In 2001 I formed a group called Salamander, with Peter Jeavons and Nathan ‘floods’ Winterflood which mixed jazz, funk, soul and electronica. Salamander released its first album in 2003 which was called ADAPT. Around that time I was being commissioned by other artists and groups to write new works. One of those led to the Jazz Meets Mozart project and another, for the Fremantle International Jazz Festival led to the composition of the C.Y.O’Connor Jazz Suite. The Jazz Suite was a four movement work and was written for 27 performers. It opened the Jazz Festival and was recorded live. Although recorded in 2006, this wasn’t made available until much later. In addition to these projects I was doing work for other artists. There was however a bit of a gap of my releasing my own albums between 2006 and 2011. During that time I was doing quite a lot arranging for artists such as Ben Folds, Tex’n’Tim, The Panics & others, particularly for their performances with orchestras.

MT: Can you tell us your most memorable experiences of who you have worked with?

Michael: Jamming with Wynton Marsalis was definitely a highlight. Recording and performing with US trumpeter Dominick Farinacci. Dominick was featured during my performances in New York last year at Jazz at Lincoln Centre which was very exciting for me, this was in part because I was sharing so much of my original music in that setting. Working with Egyptian cellist Hassan Moataz &  Performing with Ziad Rahbani from Lebanon in Abu Dhabi. Playing drums with Kate Ceberano and WASO was a lot of fun. Bassist, Peter Jeavons and I performed with French composer and pianist, Michel LeGrand. This was a number of years ago and was quite a challenging and stressful experience, particularly during rehearsal but the performances were amazing.

MT: Having worked with some of the greatest artists and musicians in the world, what would be your advice for new and upcoming musicians regarding collaborating with others be?

Michael: Continue to develop your craft as a musician, realising that there’s always more to learn. Always strive work with artists that inspire you.

MT: You also wrote a book called ‘21st Century Drumming’, what inspired you to write this book?

Michael: I have written two texts for drummers, 21st Century Drumming in 2004 (book and CD) plus Groove Masters in 2017 (Multimedia iBook). Both of these are designed for drummers and percussionists in their two years, rather than advanced students. I wrote both as I feel there are lots of great resources for advanced students but I wanted to expand what was available for students who are right at the beginning of their musical journey.

MT: You are very active in performing and notice there are incredible artists associated with your shows. What kind of input do the artists and musicians who perform with you have?

Michael: The artists I collaborate with have a huge amount of input. Principally from the performance side i.e., their artistic personality

MT: How do you put these shows together when everyone is spread across the globe?

Michael: I have developed a network of artists and contacts in many parts of the world which has been built up over a long period of time. I guess this network aspect is very important but also, my training in jazz, composition and arranging is an integral part too. I think it opens you up to skills that enable you to communicate with musicians from lots of different backgrounds, not only musically, but technically too. Lastly, seeking to understand cultural differences and varied ways of working together is important as well.

MT: Your latest piece of work has only just been released, can you tell us a bit more about this single, who is featured and where it was recorded?

Michael: We’ve just released ‘Just Out of Reach’ Live feat. Evelyn Feroza. Evelyn is a really incredible Malaysian vocalist and it was so fantastic to capture her performance of Just Out of Reach which was written by myself, Australian vocalist Aysha Amani and Perth producer Trilby Temperley. Secondly we have also just released a crazy recording called “Mega Jam” which is my arrangement of the Gershwin classic Summertime. It features mind-blowing Russian bassist, Anton Davidyants and the incredible Ukrainian keyboardist Oleg Polyanskiy. It was recorded in Kuala Lumpur, Kharkiv and Moscow. I’m really excited to share both of these tracks.

MT: You tour all around the world, so what’s in store for 2019 and where can people see you?

Michael: I’ve just been to Asia (December) and the Middle East (January) but I’m very excited about some Australian shows that are coming up in the middle of the year as I will be bringing artists from Asia and the US to work with Australian musicians. We will be showcasing new songs

Michael; Just a big thank you for talking with me!

Thank you so much for your time Michael, I really appreciate it. 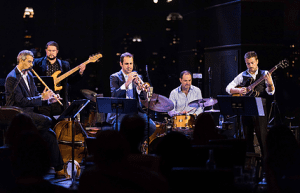