From what began as two musicians taking years into finding their way through their own individual musical journey’s, the end result spells success with the latest music coming from the duo, Gravity Castle.

From nearly 5,000 miles away, the Gravity Castle duo eventually found each other. After front man Oliver, made the journey across the pond from London to the US, he settled in Utah where he began to plant his musical roots.

Oliver and Gabriel teamed up as the new duo under the moniker, Gravity Castle in September of 2018 and shortly after, released their first 5 track EP ‘Waves’ generating nearly 100,000 steams collectively in the final months of 2018. 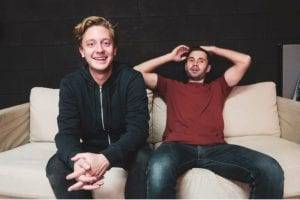 In early 2019 they released their first music video, ‘I’m Sorry’ along with the start of their YouTube vlog series ‘Gravity Files’.

With the release of ‘I’ll just be me’ out today, the duo believes they have found their ticket to the ears of listeners around the world.

Just Like Gravity, their music pulls listeners in from all around the world and their new song ‘I’ll Just Be Me’ is no exception; incorporating crisp clear sounds with unique smooth catchy vocals which engages the listeners and wanting more.

I talked with the Oli and Gab about their music, how they met and what’s in store for Gravity Castle.

MT/Tracey: Who are the members which make up ‘Gravity Castle’ and what do you each do in the band?

Gravity Castle: We are a duo. Oliver Kersey is our front man and Gabriel Gledhill is the sidekick. Aside from vocals in a standard set you will see each of us playing any or all of the following; acoustic guitar, electric guitar, bass, keys, synth, ukulele… even a violin if Gabriel gets crazy. But it keeps things fun and changing as both of us are comfortable on multiple instruments.

MT: Where did the name ‘Gravity Castle’ come from?

GC: Gravity Castle has a hidden meaning to it that is important to the both of us. We believe that there is a not of negativity in the world and that music can be a vehicle of good. So the ‘gravity’ represents the ever nagging pull of negativity from the world, while ‘castle’ represents a safe place or fortress from it. We hope to create this atmosphere with our music and especially at our shows.

MT: Where are you from?

GC: Oliver is originally from London, England and Gabriel from Park City, Utah. They both reside in Orem, Utah now.

MT: How did you both meet?

GC: We originally met in Provo, Utah. Gabriel was performing at a small cafe as a duo at the time. After that night, we didn’t connect together musically for a number of years as we each were doing our own thing. When we finally came together, we wondered why we had waited so long and now always wonder hypothetically where we would be now if we started this journey together four years earlier.

MT: What inspired you to begin a career in music?

GC: I believe that it was a lot of small things over the years that eventually culminated at once in a sandwich shop one day. We had both studied music our whole lives and loved it, put in the time to develop song writing abilities as well as invested time and money into the necessary gear and knowledge to produce with it. And suddenly one day, even though we had both felt it before, vocally decided that “hey, we can do this. Let’s go for it!” And Gravity Castle in its ideation was born and fuelled with a dream.

MT: The move from the UK to USA for Oli is a massive undertaking for anyone, let alone an entire family. For anyone making such a decision would indicate how important their career path is to them. How easy was this decision to make?

GC: Olivers initial decision for his university studies was a big undertaking. Fortunately, his wife who is also from London was US bound for the same reasons. Regardless, immigrating to a new country was a huge decision and life change but has been for the good.

MT: What did you friends and family say about your move to USA?

GC: Initially they were all really excited for the big adventure so to speak. But the challenge has been staying connected with them over the years. Flights home currently break the bank.

MT: Does Gravity Castle have management or do you try and do things on your own like so many indie artists?

GC: Do our wives count? Gravity Castle works under the label Salt Valley Records LLC which is owned by us as well. So no management for us. We have all the responsibility on our plates at the moment and we believe we are on the right track. If a big label is reading this, feel free to call us and change our minds with a contract. 🙂

MT: Have you both studied music?

GC: Yes we both have from a young age. Oliver began playing the guitar at 14 and singing at 16 and gradually combined the two into a stage performance as the singer/songwriter that he is today. I, on the other hand spend the majority of my youth playing classical music on the violin in orchestras for 13 years. Eventually i would find a guitar and my world was altered ever since.

MT: Do you both work day jobs as well?

GC: We both do… for the moment. While we both love what we do, we ultimately want to live out the dream of becoming full time musicians. We realize that there is a lot behind those words but believe that it is on the horizon for us.

MT: Can you tell me your song writing process? Do you have a formula?

GC: It changes at times. Its unpredictable but there are sudden moments of inspiration that strike and if recorded can translate quickly to things of beauties. I have hundreds of vocal recordings of melodies or bass lines recorded that just seem to come to me at odd times. Having those little snippets recorded allows me to go back and explore them when time permits and really dig into their full value. So to break it down, it usually all begins with “the hook” and is built upon from there.

MT: Personally, what kind of music do you both like to listen to?

GC: We both appreciate a wide variety of music both mostly we hone in on singer/songwriters and alt/pop producers. They tend to give us the vibes we seek.

MT: What kind of artists or bands inspire you and get you excited to write and record?

GC: There are so many that fit this category but there are a few that stick out. Lyrically, Andrew McMahon is a personal favorite and inspiration of mine. He is one of the few artists that i truly believe are an open book and listening to their music lets you understand them at a human level. I know his music, therefore i know Andrew. As a writer it’s hard to top Ryan Tedder, front man of OneRepublic. He is the heart of what feels like a third of all top pop songs that come out. If you haven’t already, google the list of artists he has written for. He is so great because of two aspects. First, we writes hooks that are short and memorable. You just get stuck with them in your head. And second, he writes about topics that everyone relates to in a way that no one has said it before. FYI, that’s much easier said than done… teach us your ways Ryan!

MT: Will you be performing live anywhere?

GC: With the release of our newest single, “I’ll Just Be Me” now puts us in a place, content wise, that we can begin booking shows. Summer 2019 should be a riot!

MT: Do you plan your music releases for the year ahead?

GC: No, although maybe we should. We get to excited about our music that we want to release it much sooner. Most releases have a 90 day plan.

MT: What’s the big picture for ‘Gravity Castle’ and where would you like to see yourselves 5 years from now?

GC: Big picture- to connect with people and provide for our families. In 5 years we see Gravity Castle as a full time job that consumes our time between songwriting, recording, producing and traveling. We’re on our way, we can feel it.

MT: You have had music releases before, how many singles/EP’s have ‘Gravity Castle’ had to date?

GC: We released two Singles, ‘You’ and ‘I’m Sorry’, both of which are found on our debut EP ‘Beginnings’ which was released in November of 2018. Since then, ‘I’ll Just Be Me’ is our latest single release, which goes live (today!) on February 20th, 2019.

MT: Today marks the official release for your latest single ‘I’ll Just Be Me’. Can you tell us a bit about this song? What’s it all about?

GC: This song is a really upbeat and fun song with some deep meaning behind it. The song title, ‘I’ll Just Be Me’ really is just a blanket overview. Growing up i realized that i had quirks and was odd. Coming to terms with that and learning to love every aspect of myself was life changing and brought to light new happiness. The verse lyrics pick out different aspects about our lives and lives of those dear to us that are “different” from the norm, and the chorus ties it all together saying “I’ll Just Be Me. You Just Be You” expressing that we all just need to be who we are. And the upbeat/happy vibe of the songs portrays what i believe ae accurate feelings that come with accepting and being who we truly are.

GC: You bet there will be. When… TBT

MT: Is there anything else you would like to mention to us?

GC: We want to thank Tracey and Music Talks for sharing our music, taking the time to interview us and believe in us. It’s great to feel support from someone literally all the way across the world. We hope our paths continue to cross and hope to be with you in Australia soon. Cheers!

Awwwe, gee thanks for the interview Gabe and Oli, and all the very best with the new single ‘I’ll Just Be Me’