After touring nationally in 2017, Country Music performers Natalie Pearson and Toyota Star Maker Finalist Brook Chivell have teamed up to release a catchy feel-good duet ‘I Wonder What You Kiss Like’. 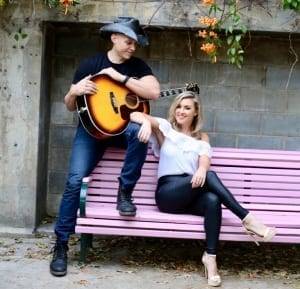 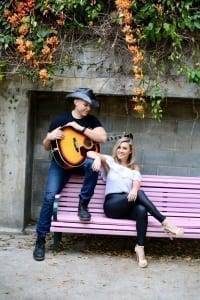 Penned by country music favourites Kaylee Bell and The Wolfe Brothers and produced by Adrian Hannan, the song tells the story of a young couple who want to make their first kiss perfect but keep getting interrupted.  Will they, won’t they?

The song debuted at #2 on the iTunes Country Charts and #31 on the All Genres Chart on its day of release.  The track is currently at #2 on the Country Tracks National AirPlay Chart so it’s off to a great start!

MT/Tracey: Hi Natalie and Brook. Can you tell me first of all, where in Australia you are both from?

Natalie: I grew up in Perth, Western Australia, but recently moved to the Gold Coast

Brook: I grew up in the north west of Melbourne but I moved to the Gold Coast 4 years ago

MT: Do you think there is a preferred city for Country music, where perhaps most country music artists like to reside?

Natalie: There are Australian Country Artists scattered all over Australia, but I have noticed there’s a little scene building in Gold Coast in Brisbane, and Queensland in general has a real country music love.

Brook: Country music is generally growing all over Australia but there is definitely a vibe in south east Queensland but there’s also a really good scene in Newcastle as well.

MT: You have both had an amazing 2018 both independently, how did you meet?

Natalie: We met briefly at the Tamworth Festival a few years ago, and then had more of a chat and catch up at the CMC Awards 2017.

Brook: The CMC awards in 2017 was where Nat and I met properly and we got along really well.

MT: Who’s idea was it to record a duet with the latest song, ‘I Wonder What You Kiss Like’

Natalie: The song was pitched to me by Nick Wolfe from the Wolfe Brothers, and I loved it straight away. I played it to Brook and we thought it would make a great duet, so we asked the guys and had a play with the arrangement and took it into the studio.

Brook: Nat and I had both made appearances in each others film clips for ‘Mr Wrong, and ‘Hot Country Girl’ so we were looking for a song that might work as a part 3 of that story. We thought ‘I Wonder What You Kiss Like’  would make a fantastic duet when we first heard it and also a great continuation of the story.

MT: The song was written by some of our most loved country artists/writers; Kaylee Bell and The Wolf Brothers, did they write it specifically for you both to record as a duet?

Natalie: They wrote it together as part of a writing session and I think Kaylee had been performing it live in her sets for a little while, but I guess it didn’t suit her vibe at the time so she didn’t record it and instead they held on for someone they thought could bring it to life. So happy it was us!

Brook: What she said haha

MT: The country music community is a close knit one at that, which see’s many artists collaborate and perform with each other. Are there any stories or particular shows or memories that stick with you when working and touring with people like Adam Brand, The Wolf Brothers, Casey Barnes or Ben Ransom?

Natalie: It’s probably more the hang that is the great part about collaborating and working with other artists – everyone is so friendly and down to earth, and a lot of fun to gig with.

Brook: When you’re at one of those shows you just never know when you’re going to end up on stage singing, throwing inflatable toys into the crowd or generally having fun lol

MT: Do you write your own songs?

Natalie: Yeah, we write our own songs! I do a lot of co-writes, I find the ideas flow better when you have someone to bounce off.

Brook: Funnily enough this is the first time I ever recorded a song that i wasn’t part of writing (aside from a cover of Cold Chisel’s ‘Flame Trees’ for my first album).

MT: Who was your biggest inspirations while growing up in the music world?

Natalie: I was inspired by Michael Jackson growing up – his voice and performance was second to none! I also really enjoyed watching Taylor Swift grow from talented teen to world domination.

Brook: My year 7-10 music teacher Ms Tanawaska, I had a whole bunch of friends that learned music at the same time when I was 16 or 17 and we all influenced each other by teaching each other things that we had worked out or learned.

MT: When you toured nationally in 2017, how long did the tour go for and what is the one thing you recall from touring that you will never forget? (If there is one)

Natalie: We had an intensive 2-3 week part where we were driving interstate and performing everyday – sometimes twice! And then we had a few months either side where we flew over to WA, and up to the mine sites, and down to Rural Victoria for some full band shows. Probably the most unforgettable moment was breaking down in Brook’s F100. Thank you RACQ for sorting us out though!

Brook: Haha the funniest part for me was Nat driving Esme (my F100). She needed a pillow behind her back to reach the pedals. So in the end I drove a lot of the time. 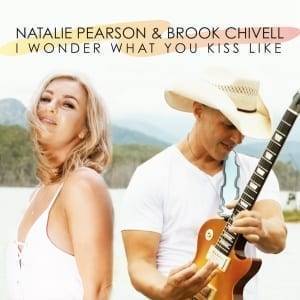 MT: For those who don’t quite know how a tour is planned and set up, how do you begin the process of setting up a huge national tour? How do you decide what songs to play and…… is there a big bus? (I can’t help think of the Partridge Family. lol)

Natalie: We had some gigs booked through an agent first and basically connected the dots with towns and stops along the way. I researched venues and emailed and called, and also contacted Caravan and Tourist Parks. We travelled in Brooks F100 – so almost like driving a boat down the road – not quote a bus haha!

Brook: It really was a matter of choosing where we wanted to go and contact places in the areas to book shows. It was such a fun time. Hopefully a bus is on the horizon 🙂 that’s what i think of when I think of touring as well

MT: What do you do away from the stage while on tour? Do you test out the local restaurants or play games or exercise?

Natalie: The last tour we did was pretty much just transit between towns, so not much down time! Though on the mine sites they had a pool which was amazing!

Brook: As Nat said it really was get into the venue, set up, sound check, play the show, pack down, load out, find the accomodation and sleep, wake up and head to the next town. We ate at far to many service stations along the way lol

MT: Do you think country music has changed from what it used to be like in Australia?

Natalie: I think like any music style, it evolves and new trends are formed. I definitely think country is the most diverse style at the moment – so many different sounds, it’s great! Something for everyone! (Even if you *think* you don’t like country music!)

Brook: I think its evolving which is great. Music that doesn’t evolve dies. Is a very exciting time for country music. Radio stations that would ordinarily balk at playing anything with the label ‘country’ associated are starting to play Keith Urban, Kasey Musgrave, Morgan Evans and many more.

MT: Congratulations BTW on the incredible achievement of ‘I Wonder What You Kiss Like’ debuting at #2 on the iTunes Country Chart, as well as #31 on the all genre’s chart and more…what a great start to 2019. Do you have plans to tour again?

Natalie: Thank you so much! We have a few gigs already booked in for the next few months – Gold Coast, Ballina, Sydney and Kilkivan, and then later in the year we have a couple of festivals including Gympie Muster in August.

Brook: We are definitely planning to get out on the road a lot this year. We have quite a few shows booked for the next few months and I’m playing at VDM fest on October 12 in Biloela and a few other things that we can’t quite let out of the bag yet

MT: All the best with the new single. Is there anything else you would like to share with us?

Natalie: Thanks so much for all your support! We love hearing back from everyone who digs our music – feel free to hit us up on our social media pages! @natpearsonmusic

Brook: Thank you so much for having us. We really appreciate it.

To all the readers please get out and support live country (or any) music in your area no matter who it is. We all appreciate your support

Thank you so much for your time Natalie and Brook, I really appreciate it.

LINKS TO NATALIE AND BROOK