It’s ‘Not Over’ For The Narcs

If you were to look at the New Zealand music charts anytime in the mid-80s Kiwi based band The Narcs were consistently riding high. In the golden age of touring bands, The Narcs filled pubs and concert halls, played numerous festivals and opened for iconic international acts like Queen and Elton John. They toured relentlessly up and down New Zealand and across the ditch with bands like DD Smash, Split Enz, Midnight Oil and Cold Chisel. They were also in the vanguard of bands who made music video hip. 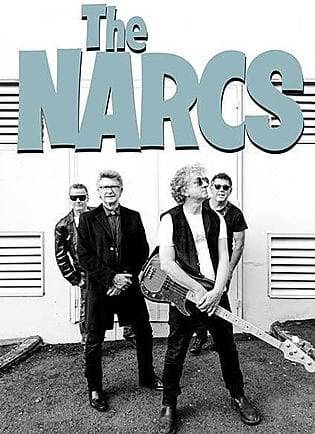 The band started as a trio in Christchurch in 1980, scoring residencies at pubs and nightclubs. It wasn’t long before their hard-edged Australasian influenced rock sound had the band playing regularly to 800 people on Friday & Saturday nights. The trio started regular touring around the South Island where they quickly built a cult following. Their early recordings spawned power pop songs like First Chance To Dance, Over My Head, No Turning Back and Stay Away which helped define the Kiwi pub rock sound that grew with the rise of Hello Sailor, DD Smash, The Exponents and Pop Mechanics.

In 1983 the mainstay trio of Andy Dickson (guitar, lead vocal), Tony Waine (bass) and Steve Clarkson (drums) moved to Auckland and were soon joined by respected keyboardist Liam Ryan. Over the following years the band wrote a slew of radio and video hits including (You Took Me) Heart and Soul, Lazy Susan, Diamonds on China, Abandoned By Love and Missing In Action”.

The Narcs’ legacy includes two EP’s, several singles, a shared live album with Coconut Rough, three studio albums – “The Great Divide” (1984), “The Narcs” (1986) and “Push The Boat Out” (1996), The band had a reputation for highly successful national tours and dynamic live performances.
In 1984 The Narcs stormed the New Zealand Music Awards claiming 5 RIANZ gongs on the back of the release of their album “The Great Divide” and the chart topping single “(You Took Me) Heart and Soul”. A CBS record deal at the time also saw H&S released in 9 countries around the world, something no other kiwi band apart from Split Enz had achieved before the rise of the internet.

The Narcs returned to the live concert scene playing at Mills Reef Winery in 2014 .Following Steve Clarkson’s retirement from the band, drummer Peter (Rooda) Warren of DD Smash joined as a guest to perform at the SnapaRock concert in Nelson in 2016 and has been with the band since.
In December 2017 The Narcs joined Australian band Pseudo Echo for a successful North Island tour and went back into the studio to record a new single ‘Summerhill Stone’ https://g.co/kgs/a5oKGE which was released in March 2018 on the eve of their appearance in front of 12,000 music fans at the Selwyn Sounds Music Festival in Lincoln/Christchurch.

The Narcs have now released their second single for 2018 ‘Not Over’. The new single was written and produced by Buzz Moller (Voom) and The Narcs.

Not Over was inspired by a dream that Buzz had on the eve of a songwriting session with guitarist singer Andy Dickson and bassist Tony Waine mid-way through 2018. The song name checks The Narcs 80’s chartbuster (You Took Me) Heart & Soul and references an unfinished relationship and the need to rebuild, move forward and make things right again.

Recorded at The Lab Studios by Olly Harmer in July, the final mix was completed in early October and mastered by Mike Beever. The new single and accompanying video were released in November.

The Narcs are undertaking a North Island summer tour in January and will be appearing at Nelsons MarchFest with more shows throughout 2019 to be announced.

We thought we would ask a few questions about what they have been up to and what’s ahead for the band.

Music Talks/Tracey : I guess you could say, it’s been a long time between drinks since your original hits and your latest releases. What was it that made you decide to record new music this year?

The Narcs: It has been about finding the right time.    We have known each other for a long time- so we have tended to keep in touch over the years – it was only a matter of time before we hooked up again and played as a band. Perhaps the hardest thing has been physically getting the band together – Andy lives in Australia;  Tony and myself  in New Zealand. So it takes a bit of planning to get us all in the same room!

MT: After having played the pubs scene, opened for such huge acts like Queen, Elton John and toured with the likes of Split Enz and Midnight Oil to name a few; what are your thoughts on how much the touring and pub scene has changed since then?

The Narcs: For a while there music streaming came on the music industry was a bit confused. Now with hundreds of thousands of music acts out there touring worldwide you need to show your stuff live. So the live scene is pumping again – it’s important now for bands to show they can really play in front of an audience.

MT: With a slew of hits to your name, can you share with us the secret to writing a hit song 😉 ?

The Narcs: For The Narcs its important to be authentic – write about things you believe in.  And we have learned to keep it snappy – songs are like 3 minute movies. So we try and keep the songs punchy.

MT: What have The Narcs, (Andy Dickson, Tony Waine and Liam Ryan) been up to between the previous release of “Push The Boat Out” in 1996 and 2017 when you joined Pseudo Echo for a tour?

The Narcs:  A lot of water under the bridge! We have all had families. We have all stayed in the music business.  Tony and myself  went in to music education and perused music study as well gigging. Andy has been a gigging musician consistently over the last 30 years in Brisbane. Andy and myselfhad worked on a collaboration ( The Ryan Dickson Line EP , 2016 ) and Tony had done a solo project ( Brave Sheep, 2013). The Pseudo Echo Tour last year was a high point for us – after that tour we knew we were still match fit and the band could still kick ass night after night! It has been great to get back on the road again.

MT: How are you finding the way in which the music scene has changed in the way people now find music?

The Narcs: It’s great – very different for us being an Indie band now but we are digging the change – we have total artistic and management control over what we do . Especially in terms of writing and recording music – we all have our own studios and  the internet is a godsend with us living in different cities and different countries.

MT: Can you share with us any memorable moments from any tours?

The Narcs: There are many – certainly opening for Elton and Queen- but one of the best tours we did was with Midnight Oil in the early 80s – having breakfast conversations with Peter Garrett was eye opening for all of us . In a way the band became very politicised during that tour. We started writing songs about nuclear free Pacific, the environment and other issues which were important at the time.

MT: What’s the best piece of advice given to you?

The Narcs: Music is not heart surgery or air traffic control – so just do It!

MT: With so much experience and success, what advice would you give to new upcoming artists?

The Narcs: As above!

MT: You have only recently released your brand new single, ‘Not Over’, which is a killer of a song…(yet another hit) and this last week the video clip. What is ‘Not Over’ about and what inspired you to write it?

The Narcs: I guess the song expresses what we feel about the band – we are still standing and still rocking out after 30 plus years….so the game is not over. Obviously there are other messages in there about relation ships etc – but its ’s to  the listener to make their own meaning from the song.

The Narcs: We go on tour around the NZ beaches in January and play a couple of festival gigs over summer. And we are looking at doing a winter ski tour mid year. And hopefully another single release.

Links to The Narcs