‘Born on Stage’ Indie Rock 4-Piece and Stand Out Live Act, The Trusted

UK-based Indie Rock four-piece The Trusted have been building a hard-earned reputation as a stand out live act and one of the rising stars of the UK’s Independent Music Scene.  With their debut EP out this Friday (March 8th), we talk to lead singer Tom Cunningham about the EP, the live shows, the British music scene and the past, present, and future of The Trusted. 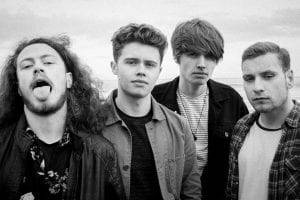 Tobi: You just dropped your first release of 2019.  Tell us a bit about it.

The Trusted: We actually finished recording the track a just over a year ago so we’ve been sitting on it for a little while now. We are very proud of this song; I think it represents a different side to our sound and highlights where we are going. It’s definitely one of our more playful songs.

Tobi: With the decline of Record Stores, new releases simply ‘go live’ on our phones, tablets, and desktops.  Does ‘the release’ carry the same significance that it once did?

Tobi: You celebrated the release of ‘Vicious’ at the Camden Assembly.  How was the show?

The Trusted: It was really great.  Definitely a special night

Tobi: Is the release party as much about sharing the moment with your fans as it is about promoting the new single?

The Trusted: Yeah, we always think release parties put exclamation marks next to our new singles. We like to make these moments important for both our fans and us.

Playing Live and a Mini Tour in Italy

Tobi: You played over 120 gigs in 2018.  How much does playing live and in particular the crowd’s reaction, influence/inform your songwriting/sound?T

The Trusted: Every gig we play pushes us forward in terms of both songwriting and identity. Playing live is so important to us, we feel like The Trusted was born on stage.

Tobi: Even with social media, do you feel playing live is still the best way to connect to fans?

The Trusted: Oh yes…. When everything comes together at the gig, it feels like we go somewhere that is only possible on stage.

Tobi: Does playing live give a band/artist more legitimacy or does it depend on the type of music they’re making?

The Trusted: It all depends on the artist. Music is flexible; it can be what you want it to be. 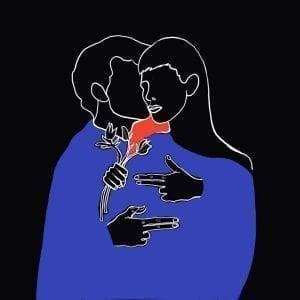 Tobi: You did a short tour of Italy in November 2018 with Brexhip.  Who or what is Brexhip and how did that come about?

The Trusted: Brexhip are an intelligent group of brilliant people who want to bridge the gap between the Italian and British music scenes. They’ve been very supportive of our work since the beginning of last year and we love what they do. The idea behind the tour kinda just happened organically

Tobi: Was the experience of playing in front of crowds in Italy different from back home?

The Trusted: It was great. Every night was fantastic, the crowds were on fire! The beautiful thing with music is that it transcends language and cultural boundaries. There was so much love and energy every night. So I guess it wasn’t really that different, we were just so glad we could take our music to a different place!

Your Sound and Your First EP

Tobi: The sound of The Trusted has evolved rapidly in the last year so.  Why do you think that is?

The Trusted: Well, we are writing all the time, whenever we can. I think every time you write something new, you push your own sound that little bit further. In the last year, we feel we’ve hit this new sweet spot.

Tobi: Your previous release, ‘Cigarettes and Chandeliers’ and new release, ‘Vicious’ were both mixed/mastered by a seasoned pro, Pete Gleadall.  What made you go ‘outside’ to find a mix/masterer? And what drew you to his work?

The Trusted: We’ve been good friends with Pete for a while now. He caught us at a show right at the beginning and has been following us ever since. He’s a fantastic producer and such a great guy to work with. He knows our sound very well so it just made sense

Tobi: You’ve been working hard on your first EP.  When are we going to get to hear it and what can you tell us about it?

The Trusted: You’ll be able to hear it on the 8th of March. It going to tie together all the stuff we’ve released over the last year. We can’t wait!

Tobi; The early LPs were simply collections of singles.  The ‘concept’ album came later. With the advent of streaming media, you could say, we’ve gone full circle back to where we started.

The Trusted: Yeah, streaming has given more power to the listener. People don’t have to listen to albums from start to finish; they can just pick and choose tracks in any order.

The Trusted: I still know a lot of people though who love listening to albums in full. You don’t see many concept albums anymore but I don’t think anything is ever truly dead, albums are still important. I think a concept album could still work if done right!

Tobi; And how did you approach your EP, as a collection of stand-alone songs or unified by one concept, theme or emotion?  And if so, can you tell us a little bit about that?

The Trusted: All the songs on the EP focus on raw emotion so we thought they would work well strung together. Hopefully, when you listen to it, you’ll see that all the songs fit together both sonically and lyrically.

Tobi: Britain enjoys a rich heritage in popular music.  Many of the world’s most iconic and influential bands/artists began life in her streets and suburbs.  But their bright light can cast a long shadow over the subsequent generations’ music-makers.

What are they to you?  A source of inspiration?  A weight of expectation around your necks?  A target to hit and then better? All of the above?

The Trusted: A Source of inspiration definitely! Whenever we find ourselves stuck, we go back and listen to all the stuff that made want to make the music in first place. You tend to find a lot of the time, the people who inspire you to hold the answers.

Tobi: Blur released ‘Parklife’ a month before my 17th birthday.  I was very much part of the Britpop generation. And as much as it served to celebrate the music of Britain and the bands of the time, it also alienated them from the audiences of other countries; most notably the in the US, where few had any real success.

Are you aware of having to strike a balance between the music being of your nation and culture, but accessible and appealing to all?

The Trusted; We try to not to think about it. I’ve been inspired by a lot of American artists and I know Dale is really into American Hip-Hop (bands like Brockhampton) so unconsciously, the Trusted’s sound has some sort of American influence. Whether that plays a role in how our music translates to people across the pond, I don’t know.

Tobi: Spotify’s decision to ‘open up’ its playlists to Independents has made the life of an Independent band much more viable.  On the other hand, the vast majority of distribution, and exhibition is locked up by the major labels.

Do The Trusted need to sign for a major label to reach their full potential as a band?  Or is the reverse true, and you, in fact, need to stay Independent to be able to control your own sound and artistic direction?

The Trusted: We are open to everything. We are just seeing where things take us.  I see the case for both sides but again I think it all depends on the artist.

Tobi: Where do The Trusted want to be 12 months from now?

LInks to The Trusted