With over 100,000 streams on Spotify, combined video views of over 2 million, music shared by Coldplay and supporting the legend Dodie……Belfast born, Owen Denvir at only 29 has asserted himself as one of the finest singer songwriters around and is now announcing his biggest project to date. 3 EP’s released over a year that form his debut album.

It was some time ago that the talent of Owen Denvir captured my attention with a need to find out more about who this incredible talented artist is.

We interviewed Owen to find out more.

MT/Tracey: Hi there Owen – how are you going and great to cyber meet you. I’ve personally become a fan of yours and so impressed with your music and vocals. How long have you been singing for?

Owen: Hello & great to cyber meet you too! I’d sung in school choirs since primary school and I learnt a lot there. Secretly I wanted to be some combination of Damien Rice and Matt Bellamy from Muse when I grew up, so I used to sing along with my CDs when I was home alone. Performing in front of people only happened through forceful and (hopefully) well-meaning friends after I’d put a few demos online.

MT: I believe you began as a violin player. What or who made you discover your voice?

Owen: I’d gotten really into music for want of having a personality as a teenager. My school had a pretty strict policy of classical-music-or-no-music-at-all, but my older brothers were into Radiohead and The Strokes so I decided I was too. I switched to viola around 15, which was a serious demotion because viola players get the most boring parts to play in the orchestra. So guitar and singing had to be my release for musical tension/social acceptance.

MT: Was there a definitive moment when you realized that you ultimately wanted to be a singer?

Owen: My Dad had a Fleetwood Mac live DVD he used to play a lot. Seeing Lindsay Buckingham play Big Love when I was about 12 hit me pretty hard. I was never particularly good at anything other than music so I’d made my mind up pretty early!

MT: Does music run in your family? 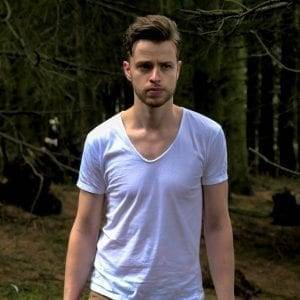 Owen: My Dad pointed out recently how it was strange that all of his children have quite creative-focused careers even though he and my Mum had quite traditional jobs. It’s hard to know which side we inherited music from because while my Dad’s Mum can’t stop talking about music, my Dad can barely string a few notes together! One of my brothers runs an annual Christmas piano karaoke night in Dublin and he’s scored entire orchestral arrangements for Sigur Ros and Radiohead tribute concerts while he was at Trinity University. Then I’ve a cousin who plays in virtually every band in Dublin to have ever featured a trombone. I think between the lot of us we could get a pretty solid show on the road together.

MT: You are about to release the first trilogy of EP Releases with ‘Sticks’ being the first, with ‘Stones’ and ‘Bones’ to follow. Can you tell us a little bit about the trilogy that will eventually form your debut album?

Owen: Yes! So the idea for the first EP came from general release-fatigue, where I felt as though in order to be compatible with “the industry” you have to do the same thing as every other artist. Recently the trend is to continually release a catchy 3:30 radio-friendly single every couple of months, in the hope that one of them will catch the attention of an industry gatekeeper (radio/streaming/blogs/press), rather than aiming directly for an audience with a full body of material. I never got into an artist or band after hearing just one single. Growing up I loved albums, and most of the tracks I’m drawn to when browsing Spotify are more lowkey or more complex than something built just solely for radio. I’ve made a lot of music over the last couple of years that I’d always felt was too personal or mellow to be released, or too much of a departure from the sound of my other singles up to now. When it came to deciding what would make the cut for an EP, I released there was a lot more material I loved than I had remembered. So the idea snowballed into releasing a whole trilogy of EPs, with the songs linked thematically through each.

MT: How did you feel when you found your music shared by the likes of Coldplay and Dodie?

Owen: It’s a real rollercoaster of emotions when something like that happens. Getting tweeted by Coldplay first of all just drew so much attention all at once – I was getting messages from people all over the world who didn’t know I existed 10 minutes beforehand. A few TV and radio opportunities opened up through that as well so it was a good opportunity to try to smuggle fans onboard while I was flavour of the week.

Supporting Dodie again came completely out of the blue and was easily one of my favourite shows I’ve ever played. She’s got such a loyal and passionate fanbase which extended to her support act thankfully, so I had a lot of fun at that show and lots of them have stuck around and been really supportive since.

MT: I believe you write all your songs; do you also collaborate with other writers?

Owen: I don’t co-write very often. Sometimes I’ll borrow a friend’s ear if I’m stuck on an initial idea. But a lot of my writing happens quite spontaneously, especially if I’ve a character in my head from a movie or something, and I find the more ideas that come all at once usually fit best to make the song flow together as a whole.

MT: Why the fascination of Sigmund Freud and how did you go about placing these idea’s into your songs?

Owen: This was actually a bit of coincidence. I’d been incubating the idea of an EP trilogy when a friend had told me about a Youtube binge they’d been on resulting in videos and Freud. They told me about his theory of personality, that it consisted of 3 individual parts that amount to 1 whole. The more I looked into it, the more it seemed to fit how I was planning my EPs. While the first 2, “Sticks” and “Stones”, are a collection of misinterpretations of love and relationships, “Sticks” is delusional in a sense of trying to make relationships work that never will. “Stones” is more brash and self-assured with misplaced confidence and “Bones”, the final EP, is a healthier balance between the two. Freud’s theory is the same but in a different order, where in a single personality the “id” acts impulsively to do whatever it wants, the “ego” is terrified of the consequences and the “superego” is the balance between the two.

MT: You are also involved in a charity called, ‘Live Music Now’. What is this about?

Owen: A musical friend recommended I get involved with this charity and I’m very grateful they did. Live Music Now aims to put live music into places where you wouldn’t usually find it but where it’s sorely needed. For the most part I’ve performed in care homes around Belfast, mostly to old folks with dementia. This led to my “Music & Memories” project with Peter J. McCauley, where we recorded an album of the residents’ party pieces from their youth, then afterwards adapted them into modern experimental works, a bit like Gavin Bryars’ “Jesus Blood Never Failed Me Yet”. I’ve also been really lucky to have been involved in lots of music workshops in special needs schools. It’s been really rewarding interacting with kids who have little to no social awareness, but will respond really significantly to the sound of a viola or with musical games.

MT: Your first single of your ‘Sticks’ EP, ‘Stay’ will also be released very soon, what was the inspiration behind this song?

Owen: It’s about a relationship I had that broke up over distance. It took a while for me to decide to make this song public.

MT: Do you perform or will you be doing any performance to co-inside with your trilogy of releases?

Owen: I have an Irish tour in the works for 2020, but the soonest date in the diary is the Belfast Sticks EP launch in The American Bar on Guy Fawke’s Night, Tues 5th November.

MT: What else do you get up to when you’re not singing or in the studio?

Owen: I’m a spectacularly unskilled 5 a side football player, a devoted watcher of Parks & Rec, and a super fun uncle to the cutest niece in the world.

MT: If music was taken away and no longer in your life, what do you think your second calling would be?

MT: This is our famous question….do you have any pets? (I know, nothing to do with music)

Owen: NO and it’s an absolute travesty, I’m aiming to get a dog as soon as humanly possible

Owen: If you stream my music, I can’t guarantee your life will be flooded with success and happiness, but there’s a chance it might so you totally should.

Thanks for your time Owen, have a great day!

Owen: Thanks! You too!