Agnesse Will Have You Captivated With Her Vocal Artistry & Flair

Space and Time went through a difficult journey to creation, taking almost one year in total. A stolen computer led to lost vocal samples that had to be re-recorded and re-mastered into the track that is brought to us today.

Time is precious and this track speaks out about the universal desire to press rewind when life feels as if it is travelling too fast. Agnesse brings us into her personal story where she expresses her wish to spend more time with loved ones.

Agnesse hails from Riga, Latvia where she grew up surrounded not only by native talent but also international superstars such as Ariana Grande, Anne-Marie and Dua Lipa. She now bases herself in England as she juggles music and her studies.

Having performed live throughout her childhood, Agnesse has perfected her stage sound, promising a captivating show with impressive vocal range.

In 2018 she participated in National Eurovision contest (Supernova) up until the semi-finals with her original song “You Are My World”, which hit 150,000 streams on Spotify, 40,000 views on YouTube and was played on one of the biggest radio stations in Latvia.

I interviewed Agnesse on her musical journey thus far and what’s ahead for this lovely talented young woman.

MT/Tracey: Hi Agnesse, Awesome to meet you. I think you are the first artist we’ve had on Music Talks that’s from Latvia. Who did you listen to when you were growing up?

Agnesse: Hi! Glad to hear that! As I remember, my first musical influence were, of course, what my parents were listening to, for example, Queen, Phil Collins and many other bands and artists, but as I started to explore music by myself, first artist what I was listening a lot was Sarah Brightman and after her followed Madonna, Rihanna, Beyonce, Britney Spears, basically all the female artists who were popular in that time of period.

MT: I believe you are from a musical family, how much support and influence does your family have on your music?

Agnesse: Yes, my dad is composer, pianist, producer, and my mom is a singer. I really love that, because I can always get honest opinion and constructive critique, which always let me grow as an artist. They both are professionals in music, so it is such a great opportunity for me to always get feedback from music professionals. They are the biggest support for me!

MT: I have to admit, I’m not too familiar with the music in Latvia. Your latest music is very commercial pop sounding, did you write your latest single, ‘Space or Time’.?

Agnesse: I am not really into Latvian music, so I don’t know what is in the charts here. My dad Helvijs Stengrevics created and produced music, but lyrics were written by 2 times Grammy award nominated artist Kristal Oliver. So this time I played the role as a singer in this project.

MT: What did you learn from performing in the talent competitions like X Factor, Baltic Talent and even the Eurovision Contest?

Agnesse: I learnt that before coming on the stage, you have to be mentally prepared, otherwise, if stress takes all over your body, you will perform worse than you actually can. Second thing I learnt is – if you think you have worked enough, work even harder and perform more before the actual performance. Because, when you get on that stage, personally for me the situations were that I was so stressed on stage, that it might have helped to reduce the stress levels if I had worked even harder before (although I already did) for the subconsciousness – I might have felt more ready and not that scared of messing something up. But of course, enjoy while you are on that big stage. That is what I have to learn, because I overthink everything and forget that sometimes I just need to relax and stop thinking about all the nuances while performing.

MT: Even though we are all familiar with the bigger named artists, can you tell me one of your traditional favourite songs or artists from Lativa?

Agnesse: hmm, I could say that for now my favourite artists are Dons, Aminata and Triana Park – I do not have any specific favourite songs though, but I like these artists and bands charismas while performing and their sound.

MT: I believe you’ve recently moved from Latvia to England, how does the music industry differ, what are the changes between Latvia and England?

Agnesse: yes, that’s right. Music industry in Latvia is way smaller than here in England. It is way harder to get contacts, gigs etc. + here is way bigger competition than in Latvia. But because of that, I could say that the level of how you should sound, perform aka quality level is higher in England, what I like more, because it gives you bigger motivation to become the best. Sometimes in Latvia I can hear that some artists do not really put that much of an effort on working with their music or quality of their performance, because they will get gigs anyways. But don’t get me wrong, we have really professional musicians in Latvia as well, I just believe that there might be even more, if standard of the quality level would be higher and places would not give gigs to artists who don’t put enough effort in their work. But overall, biggest changes were the population of people, cultural difference with what I had to get used to and the fact that I am living on my own in England, which brings bigger responsibility and many other things to learn and be responsible of.

MT: Are you doing any live work in England?

Agnesse: Mainly I study, but on my free time I do perform in concerts and open mics! Latest concert was Bucks Band Wagon which happened in 4th of April.

MT: Can you tell us what ‘Space or Time’ is about?

Agnesse: The story of the song is when you are together with the ‘real’ person, does not matter your best friend or lover, time flies unbelievably fast. There is no explanation for this phenomenon, the only thing you want to do is to press the rewind button and live it all over again. The lyrics are very dear to me, because I am in a long distance relationship and whenever we finally meet for a week, it seems that the time we have spent together was short as day and now we have to say goodbye again, which is so hard and everything I want to do is just live it all over again, have a little more time. My goal was to be able to explain these feelings in a song which, I think, we did very well.

MT: I read that you had your computer was stolen which had all the samples and tracks that were to be recorded/mixed but had to re-do everything again. What a nightmare. What did you tell yourself when it came time to having to re-record every single thing again?

Agnesse: Yes, that was horrible. Well, we really liked this song, so we just had to bite our teeth and do the hard work again no matter what, so I just said: “Lets do this!” (laughing) Thank God, my dad had the base of the song saved, so we did not have to do everything from complete scratch. But vocals and majority of production were gone, so I flew specially for two days to Latvia to re-record and re-create them again.

MT: What else are you doing in England a part from your writing and recording?

Agnesse: I am studying in music university, program “Music Performance Management” and working as Student Ambassador. And of course, practising my vocals. 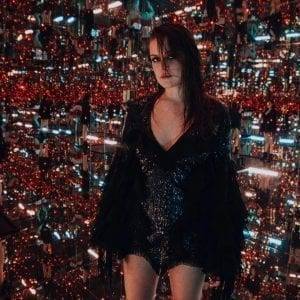 MT: What other hobbies do you have that’s outside of music?

Agnesse: Living in England is something new for me so I do not have many activities except music. I often go to gym and while in Latvia, train kids in figure skating, because I was a figure skater myself for 12 years. I don’t skate anymore, because I have few traumas which forbids for me to do figure skating professionally. But at least I can teach others what I know and can do, which I really love!

MT: The music business is such a tough industry, I’m wondering what your thoughts are and what your plans are from here and how you are going to take it on? (sorry, kind of three questions in one)

Agnesse: I already mentioned above that yes, music industry is really tough and in England it is a big competition to get somewhere. But for now, I am really focusing on making and creating my sound and character, which will differ me from any other artist, what is the most important thing in the music industry – be unique and create sound never heard before and music what people will buy!

MT: What do the songs you write and the music mean to you personally?

Agnesse: The songs what I have, which are not that many yet, talks about my personal life and what I go through. They mean a lot to me. Every song, when I release it, comes with a piece of my soul and I hope that people can feel it!

Agnesse: I really hope that everyone who listens to my music likes this song and thank you for taking your time to listen to it! I really appreciate that! Also – new music coming very soon, so keep tuned and follow me on social media!J

Congratulations on ‘Space and Time’, it’s a great song. Thank you so much for your time Agnesse I really appreciate it.

Agnesse: Thank you for the interview!

Agnesse has recently released Space and Time to each of her digital platforms available to listen NOW.