A Powerful Message For Women Who Aspire A Career In Music

If you haven’t heard of DIDI, then we suggest you listen up.

It seems DIDI is a natural talent with so much to offer. Not only does DIDI have a natural talent for music, but a talent for producing and writing with the help from her fellow girl powers; Lauren Deakin Davies, aka DIDI, Rhiannon Mair and Katie Tavini.

DIDI, Rhiannon and Katie are now seen as the great triumvirate (a woman’s first, as opposed to Julius Caesar’s unofficial coalition)  and it looks like the team of DIDI know what it’s all about. 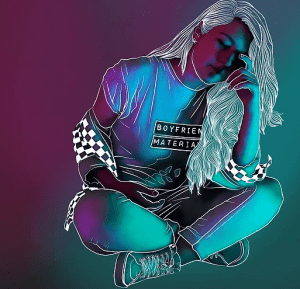 There’s no stopping this creative power house! Juggling two interlinked but demanding roles as a performer and a producer, Lauren Deakin Davies has developed something of a reputation for her feisty lyrics and powerful delivery, attracting national radio play on BBC 6 Music and is among the hardest working young music creatives on the scene at the moment.

Not only does she head up her pop/punk four piece DIDI but her production skills combined with her voluble confidence, have led her into mentoring, public speaking and lecturing, and she is proving popular on the specialist music panel circuit, especially encouraging women into production roles.

Perhaps not surprisingly, her high profile activities have attracted awards.

Hot on the heels of two recent prestigious awards from the East Anglian based NMG Awards for Producer or the Year (which she has just won for the second year in a row) and Breakthrough Artist of the Year(for the artist who has made significant impact in the region), Herts based Lauren Deakin Davies aka DIDI recently released her fifth single Fickle Friends and is now following it up on Nov 2nd with her debut EP, ‘GREEN’, which includes all her released singles to date, plus an unreleased track GO!, all of which she has been gigging over the 18 months since she started performing as DIDI. Most recently, DIDI  has been shortlisted of three for Breakthrough Studio Engineer for the national Pro Sound News awards held at the end of November in London.

The limited edition DIDI ‘Green’ EP, has been described by DIDI as being quite special, as it showcases her body of works to date since she first began writing it in March 2017.

Lauren, aka DIDI, was aiming for a fuller sounding band vibe but without the tracks sounding too similar, somewhere between Paramore and early Arctic Monkeys ( but less cool aha, say’s Lauren) At the end of the day I think a song should be able to stand on its own in any genre but the producer in me is also aware of how integral the sonics are in a track! It’s been quite interesting watching the transition of the tracks from their earlier incarnations and comparing to what has become their sounds both live and on the EP.

Andrew Mullen had a chat with DIDI about her influences, rituals and performing live.

MT: Can you briefly introduce yourself to the readers of Music Talks? Just a little bit on who you are, where you are from, what kind of music you do… etc.

DIDI: Hi I’m DIDI, last year I bit the bullet and started performing– in the past I wrote but didn’t do any singing, just played guitar or did backing, but I wrote a song which I felt I just had to record and while I am no Hayley Williams, people seem to have embraced the raw energy and passion in what I am expressing and it’s been a rollercoaster ever since!  I am a self employed producer ‘by trade’ and do a lot of panels and stuff trying to encourage other women to get involved in the production side, which I’ve been doing since I was 18. I’m now 23 and am based near London and spend my time split between working on my own music, and that of others and I was thrilled to win a regional Producer of the Year award for the 2nd year running and also a Breakthrough Artist award from the NMG Awards recently.  Getting plays on BBC 6 Music for my releases has definitely been a highlight and it’s been called ‘grubby punk pop’!

MT: What was the inspiration behind the song ‘Fickle Friends’?

DIDI: I wrote this song (Fickle Friends) a little while ago and it was originally written on ukulele of all things. It’s very interesting to see the transition in my mental state between when I wrote this and now. I was feeling quite bitter at the time (as you can probably tell from the lyrics!) I was very hurt and I still feel quite strongly about this song and the situation so it made sense to release it as a single. Perhaps other people will relate to the raw emotion?

When I perform live I always open with it and I feel like it has got a strong up beat vibe that really sets the tone for the rest of the set! Originally it didn’t have the guitar part at the beginning and just started straight away with the vocals but after a little bit of deliberation I came up with an intro guitar part and went for a bit of a classic britpop vibe, then I took it to my amazing co-producer and drummer, Rhiannon Mair and we added the overlay high guitar which sounds a bit like a synth – we’re both quite influenced by MUSE aha!

The middle 8 was written when I was beat boxing (for fun!) in my car. I had a basic idea of a melody that I wanted and I beat boxed the rhythm to work out how it should go, then I took it to Rhiannon who is amazing on drums and we went from there.  Overall I think that this song is probably one of the most personally aggressive songs I have written but also it is so fun to play live. I think it’s a massive reflection of what was going on at that time and I just wanted a song with high energy, and this is what came out!

MT: What 3 things kept you sane while recording your EP?

DIDI: Chocolate biscuits, diet coke and … joking aside, (actually, I wasn’t joking!) I was quite lucky with this really, as the EP is essentially a collection of my singles, which were crafted over the last year or so, so there was no ‘pressure’ to churn it out in one go. Also, while I started off producing the tracks myself, out of ease really, it wasn’t until I started to get some reviews and radio play that I realised that perhaps I should take what I was doing more seriously and get some other ‘ears’ and  talent involved in turning my tracks into something I could be proud of. So I got involved with Rhiannon Mair (aka RUEN)  who has done some drumming with me live, as well as drums on the tracks, and worked with me to create most of the tracks on the EP, over a number of months, and who was eternally patient with me.

MT: What was it like compiling a band for your EP? Does the same band perform with you live? 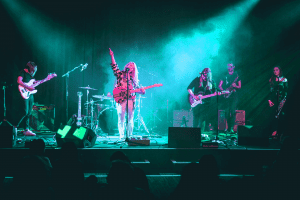 DIDI: I started off performing solo but then I really, really wanted to see what it would sound like with the sound on the record coming over the speakers! I’m lucky as I know loads of cool musicians from the production work I do, and a number of us session for each other when we’re doing gigs, so it sort of fell into place quite naturally. I’ve got a core band and occasionally someone might need subbing if there’s a last minute gig, or they’ve unavailable, but generally I perform with Emily Cooldrich on lead guitar, Churchill on bass and Kayleigh Cheer on drums, and we have real fun on stage, with themed chequer backdrop, chequered outfits and some hilarious moves we’ve worked on! For the EP itself, I played all the instruments apart from the drums.

MT: Paramore, Arctic Monkeys (you are cooler than them!) & Muse are some of your influences, what is one musical influence that you have that we would never pick?

DIDI: The Wombats perhaps? But I also love the vocals of Stevie Parker, Marika Hackman and the production, song writing and delivery on The Big Moon’s debut album, produced by Catherine Marks but then again, you might have been able to guess those influences!

MT: Do you have any interesting / weird / funny rituals before going on stage that we should know about?

DIDI: We’ve got a joke ritual that we’ve just started, where we do like a cheerleader ‘hands in’ and come up with a new phrase each time to motivate ourselves before we go on stage. It usually ends with us in fits of laughter which means it works I guess?! It’s usually such a mad rush getting the ‘homemade’ backdrop in place that I’ve not got time for many rituals other than making sure we’ve all had something to eat and have some water handy! Imagine massive sheets of polystyrene, industrial double-sided tape, about twelve-foot square of material (which I taught myself to use the sewing machine for, so I could make two chequered screens – and no, not just any normal square checks, they had to have ‘perspective’ lol – why do I do this to myself?!)  and you’ll be getting some idea of the potential for chaos! Then there’s overseeing setting the band up and getting my pedal board sorted too. I’ve always been a techie so for as long as I can remember, so I take a lot of pride in setting up and getting the EQ levels right, which makes a huge difference to the overal clarity of the sound.

MT: What is next for you? Anything cool to announce or news to share?

DIDI: There’s one more track from this EP which I’ve not released as a single (GO!) and I hope to be sharing that early in 2019. I’ve been writing some new songs too, and they are really fun and I can’t wait to record them over the next few months and start to road test them with my band at our gigs over the winter.