B.KNOX Latest Single Is Like A Landscape Painting Thats Big, Broad and Beautiful 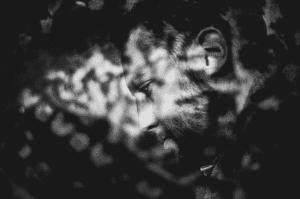 Singer songwriter B.Knox confirms my belief that good things come out of Canada. He rides that line between country and folk music with ease. A teacher by profession, Knox gives his listeners a lesson in life with his songs.

His latest single, The Fault Lies is like a landscape painting, one that is big, broad and beautiful. It conveys feelings of loss, change and emptiness, with a bittersweet edge.

Here’s how Knox describes the song,

The movement from loss and regret to unapologetic acceptance draws heavily from both of my self-acknowledged wells of inspiration – heartbreak and landscape.”

This is his fourth single, with his earlier tracks Deep, Dark Love, Living with a Shadow and Corners all demonstrating a talent and a connection with the darker side of life. He is moody and melancholic, and wonderful. I’m a fan.

He is promising to release a full album, “Heartbreak and Landscape” during 2020. I’m looking forward to seeing where this guy will take us.

His music is available now on most streaming platforms.

Jacqueline Gives 4.5 out of 5 stars

B.Knox Latest Single Is Like A Landscape Painting Thats Big, Broad and Beautiful

Melbourne Ska Orchestra; is An amazing ancient ritual that is a sacred journey for all 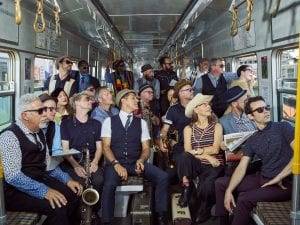 Melbourne Ska Orchestra; An Amazing Ancient Ritual that is a Sacred Journey For All

One of the things I love most about this job is that not only do I get to discover great new music, I also get to learn more about my favourites. This is what happened when I got the chance to interview Nicky Bomba, the lead and director of the Melbourne Ska Orchestra (MSO). You never really know what you’ll get when you interview someone. You prepare sure, you write down a list of questions that you hope will be insightful and at least vaguely interesting for the subject of the interview. Then you cross your fingers and hope for the best.

What I got was an education on the history of ska and why it’s so awesome. As the name suggests the MSO is a ska band. It began as a one off gig in 2003 to mark the 40th anniversary of Millie Small’s version of ‘My Boy Lollipop’, widely credited as the first commercially successful ska record. Played at Melbourne’s iconic Gershwin room the tribute brought together musicians from across the city and produced some exceptional music. Bomba says that they all had so much fun and it turned out so well, it became an annual thing. It was a full decade later that the group which at times had anywhere from 17 to 34 members recorded their first album. The MSO like so much that comes out of Melbourne is cool, multicultural (up to 215 nationalities are represented) and a coming together of different ideas about music and creativity.

I asked Nicky what drew he, and the other band members to the ska genre in particular. He told me that for most of them their introduction came from their love for the British Two Tone phenomenon, think bands like The Specials, The Selecter, Madness. The sound originated from the West Indian community in London. Struggling to find a sense of place, and to have a voice, British Two Tone brought Jamaica to the streets of London. It was about community and belonging. With its beginnings in the late 70’s and spanning through the 80’s these bands were at the forefront during the Thatcher era. Their bright, joyful sounds carried with them deeper political messages about race relations, and broader social upheavals.

My education continued, Nicky explained to me that in Jamaica, where ska music began. It was a way for the locals to add their own stamp to the R&B tracks they were hearing coming out of the Southern United States. Music entrepreneurs such as Coxsone Dodd and Duke Reid formed rival sound systems trying to produce more and better music than the other, attracting as many music fans into their venues as they could squeeze in.  The result was more and more music, with new songs released every week- on a Friday. Fans would flock to hear the latest tunes hot off the turntables.

It was with this spirit in mind that the MSO embarked on their most recent project. An ambitious endeavour, in 2018 they set themselves a challenge to record-and release- a new song every week for a year, that’s 52 songs! Nicky says it was crazy, in the end they had four albums’ worth of material. They covered the traditional standards of the genre, ska versions of popular film and tv themes (the “Star Wars theme” is especially cool) and a whole swag of new and original songs written by members of the band. By the end, the band members were sleeping and eating in the studio. But it was an amazing experience, all performers were moving in the same direction working toward creating this wonderful thing. Egos were left at the door, and it was just a year of making fabulous music together.

The result is their latest album “One Year of Ska” which was awarded the ARIA for Best World Album. I asked Nicky what it meant to get industry recognition like that. He said that while it would be nice to say it doesn’t matter, in the music industry now it remains one of the ways of measuring that you’re doing something right. In the past, you could get that from the charts, but that’s not the case anymore. There are some great songs on the album, and indeed on the entire back catalogue (I have had a ball researching for this article). I asked whether Nicky had any favourites himself. While he admitted that it was like choosing amongst his children, he did say that their version of the “Get Smart Theme” was a lot of fun. Also, the latest single, Good Days, Bad Days (available at all good music outlets) has a personal connection for him being an auto-biographical song about taking the good with the bad and just getting on with it.

The band are about to take off on a massive national tour. I asked how touring and playing live compared with recording. He said that the two experiences are symbiotic. The energy backstage before going on is particularly special and hard to beat. He also mentioned that while on the road, they make sure that they stay creative as much as possible, hinting that there is a film and some children’s songs in the pipeline. (Anyone else excited?)

Anyone lucky enough to catch the Melbourne Ska Orchestra on their tour is in for a treat. Bomba tells me fans can expect new tunes, a huge spectacle and a “humane electric loop” between musicians and music lovers celebrating music, and fun and diversity. Most of all it’s going to be brilliant. He describes live music as

“An amazing ancient ritual that is a sacred journey for all”.

I for one can’t wait. 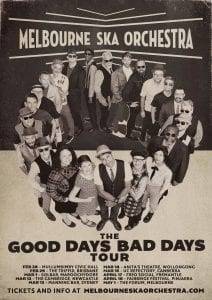 Melbourne Ska Orchestra; An Amazing Ancient Ritual that is a Sacred Journey For All